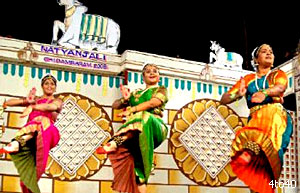 Natyanjali Festival — The ancient Nataraja temple of Chidambaram pays special tribute to Lord Nataraja – the dancing Shiva. The temple has carved pillars depicting Lord Nataraja in 108 poses of Bharathanatyam classical dance in the eastern tower. The Natyanjali festival dedicated to Lord Shiva is celebrated every year for five days in the temple premises. It begins on the auspicious occasion of Maha Shivaratri. During this time leading dancers from all parts of India congregate and dance in the temple as an offering to Nataraja. Natyanjali festival is jointly organised by The Department of Tourism, Government of Tamil Nadu, The Ministry of Tourism, Government of India and The Natyanjali Trust, Chidambaram. It is designed to promote a universal message of ‘Unity in Diversity’ conveyed in the universal language of music and dance.

The Natyanjali festival dedicated to the Cosmic Dancer (Lord Shiva) is celebrated every year during February-March. Lord Nataraja, according to Hindu mythology is the cosmic dancer. He is also called “The Lord of Dances”.

Natyanjali festival opens on the auspicious occasion of the Maha Shivaratri day and of course in the right kind of venue – the ‘Prakara’ of the Chidambaram temple. The magnificent temple dedicated to Lord Shiva, built a thousand years ago, provides a beautiful backdrop for the event. The setting is truly divine-Chidambaram’s gold-roofed temple, with pillars depicting Lord Nataraja in 108 poses from Bharatanatyam – Tamil Nadu’s classical dance.