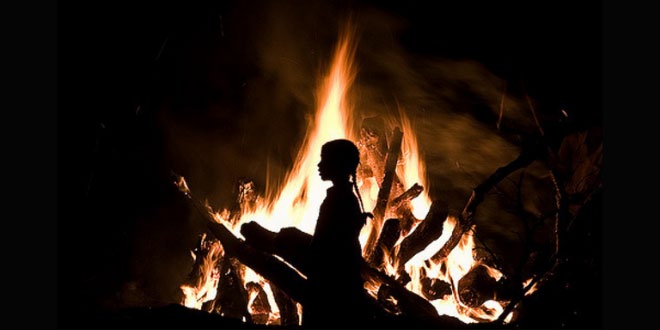 Holika Dahan is celebrated by burning Holika, an asuri (demoness). For many traditions in Hinduism, Holi celebrates the victory of good over evil. According to the tradition, people contribute a piece of wood or two for the Holika bonfire, and this represents Holika being consumed by the fire in which she tried to kill her nephew Prahlad, a devotee of God Vishnu and thus Holi gets its name. A similar holiday is Holi where people get to gather and often repair broken relationships.

Holika Dahan: The Burning of Holika

Year after year
purity of fire
is challenged by evil,
appeased with offerings

A full moon looks on
as winds stoke embers,
flare flames
to a flickering dance

Right in the center
of crimson blaze
sits Holika,
Prahlad in her lap –
her arms a circle of heat

White sparks fly from her hair,
eyes smolder in fury;
her mouth sucks in air,
engulfs rice and wheat

Holi is the great festival of colors, celebrated every year by the Hindu people in India. Holi festival falls every year in the spring season in the month of Phalgun (or March). It is one of the happiest festivals of the Hindus like Diwali. It is celebrated every year on the first day of Chaitra month. The whole environment and nature looks very beautiful and colorful at the time of Holi.

Holi festival celebration starts at the last day of Phalgun by the Holika Dahan in the evening and colour play in the next morning. Children wait for this festival with lots of courage and happiness and starts collecting colorful colors, balloons, bucket, pichkari, etc to play Holi. They also collect some sticks, straws and co-dung cakes in the mid of cross road and make a big heap for the ceremony of Holika Dahan.

They get together at the place in the night and set fire in the huge heap of sticks, straws and co-dung cakes to celebrate Holika Dahan. Women sing ceremonial songs during the Holika Dahan. Everyone becomes in happy mood and wait for the morning of next day to play Holi. We sprinkle watery colors to each other, throw color filled balloons, etc. At this day everyone forgets the social distinctions and meets and welcomes each other with lots of tasty foods and sweets.