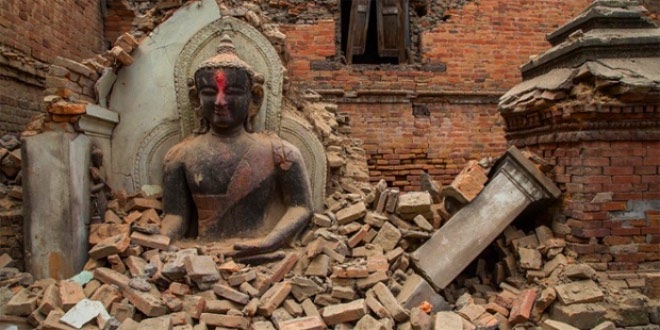 Nepal Earthquake Images: At least 3,326 people are now known to have died in a massive earthquake which hit Nepal on 25th April, 2015 (Saturday). Thousands have spent a second night outside after the 7.8-magnitude quake, which also triggered deadly avalanches around Mount Everest.

The April 2015 Nepal earthquake (also known as the Gorkha earthquake) killed nearly 9,000 people and injured nearly 22,000. It occurred at 11:56 Nepal Standard Time on 25 April 2015, with a magnitude of 7.8 Mw or 8.1 Ms and a maximum Mercalli Intensity of VIII (Severe). Its epicenter was east of Gorkha District at Barpak, Gorkha, and its hypocenter was at a depth of approximately 8.2 km (5.1 mi). It was the worst natural disaster to strike Nepal since the 1934 Nepal–Bihar earthquake. The ground motion recorded in the capital of Nepal was of low frequency, which, along with its occurrence at an hour where many people in rural areas were working outdoors, decreased the loss of property and human lives.

Hundreds of thousands of Nepalese were made homeless with entire villages flattened, across many districts of the country. Centuries-old buildings were destroyed at UNESCO World Heritage Sites in the Kathmandu Valley, including some at the Kathmandu Durbar Square, the Patan Durbar Square, the Bhaktapur Durbar Square, the Changu Narayan Temple, the Boudhanath stupa and the Swayambhunath stupa. Geophysicists and other experts had warned for decades that Nepal was vulnerable to a deadly earthquake, particularly because of its geology, urbanization, and architecture. Dharahara, also called Bhimsen Tower, which was a nine-storey and 61.88-metre-tall tower was destroyed. It was a part of the architecture of Kathmandu recognized by UNESCO.

Continued aftershocks occurred throughout Nepal at the intervals of 15–20 minutes, with one shock reaching a magnitude of 6.7 on 26 April at 12:54:08 NST. The country also had a continued risk of landslides.

Share
Previous Pray to What Earth: Henry David Thoreau
Next When were the first land animals appeared on the earth?