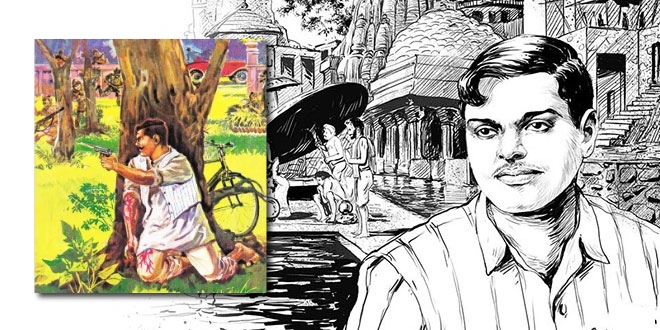 Chandra Shekhar Azad was a great Indian freedom fighter. His fierce patriotism and courage inspired others of his generation to enter freedom struggle. Azad was the mentor Bhagat Singh, another great freedom fighter, and along with Bhagat Singh he is considered as one of the greatest revolutionaries that India has produced.

Azad was born on July 23, 1906 in Badarka village of Unnao district in Uttar Pradesh. His parents were Pandit Sitaram Tiwari and Jagarani Devi. Pandit Sitaram Tiwari was serving in erstwhile estate of Alirajpur (situated in present day Madhya Pradesh) and Azad’s childhood was spent in the village Bhabra. On the insistence of her mother Jagrani Devi, Chandra Shekhar Azad went to Kashi Vidyapeeth, Benaras for studying Sanskrit.

After the suspension of non-cooperation movement Azad was attracted towards more aggressive and revolutionary ideals. He committed himself to complete independence by any means. Azad and his compatriots would target British officials known for their oppressive actions against ordinary people and freedom fighters. Azad was involved in Kakori Train Robbery (1926), the attempt to blow up the Viceroy’s train (1926), and the shooting of Saunders at Lahore (1928) to avenge the killing of Lala Lajpat Rai.

Along with Bhagat Singh and other compatriots like Sukhdev and Rajguru, Azad formed the Hindustan Socialist Republican Association (HRSA). HRSA was committed to complete Indian independence and socialist principles for India’s future progress.

Azad was a terror for British police. He was on their hit list and the British police badly wanted to capture him dead or alive. On February 27, 1931 Azad met two of his comrades at the Alfred Park Allah bad. He was betrayed by an informer who had informed the British police. The police surrounded the park and ordered Azad to surrender. Azad fought alone valiantly and killed three policemen. But finding himself surrounded and seeing no route for escape, Azad shot himself. Thus he kept his pledge of not being caught alive.