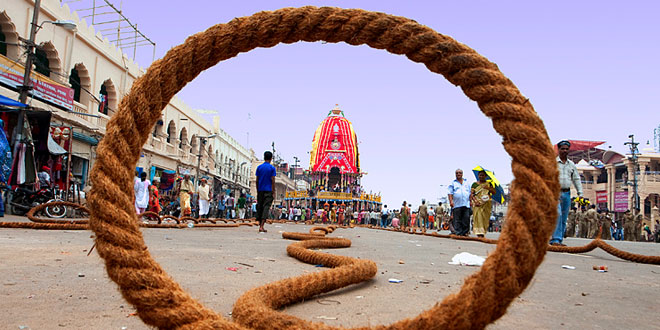 Three richly decorated chariots, resembling temple structures, are pulled through the streets of Puri called Badadanda. This commemorates the annual journey of Lord Jagannath, Lord Balabhadra, and their sister Subhadra to their aunt’s temple, the Gundicha Temple which is situated at a distance of 2 km from their temple. This is the only day when devotees who are not allowed in the temple premises, such as non-Hindus and foreigners, can get their glimpse of the deities. During the festival, devotees from all over the world go to Puri with an earnest desire to help pulling the Lords’ chariots with the help of other priests pulling the chariots with ropes. They consider this auspicious deed. The huge processions accompanying the chariots play devotional songs with drums, tambourines, trumpets etc. Children line the streets through which the chariot will pass and add to the mass chorus. The Ratha carts themselves are approximately 45 feet (14 m) high and are pulled by the thousands of pilgrims who turn up for the event; the chariots are built anew each year only from a particular type of tree. Millions of devotees congregate at Puri for this annual event from all over the country and abroad. It is also broadcast live on many Indian, foreign television channels as well as many of the websites telecast Jagannath Ratha Yatra live.