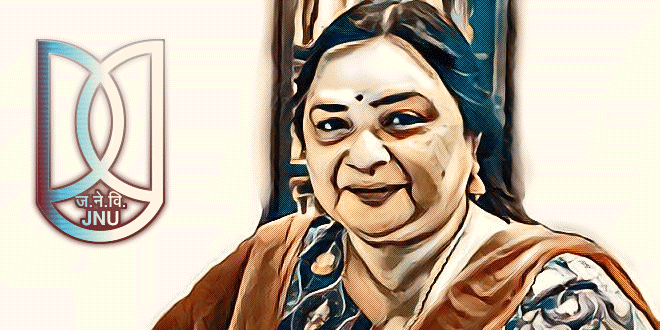 Dr. Pandit is a professor of politics and public administration at Savitribai Phule University, Pune and holds a doctorate in International Relations from JNU.

After the successful tenure of M Jagadesh Kumar, Dr. Santishree Dhulipudi Pandit has been appointed as the next Vice-chancellor of the Jawaharlal Nehru University, New Delhi. Pandit is a professor of politics and public administration at Savitribai Phule University, Pune and holds a doctorate in International Relations from JNU.

JNU congratulates Prof. Santishree Dhulipudi Pandit for being appointed as the new Vice Chancellor of JNU for a period of five years.@EduMinOfIndia @ugc_india pic.twitter.com/PMzdDyZ6mV

Dr Santishree started off as a brilliant student born to Dr Dhulipudi Anjaneyulu, Author, Journalist and retired civil servant and Prof. Mulamoodi Adilakshmi, a Professor of Tamil and Telugu at the Leningrad Oriental Faculty Department in (then) USSR. In her higher secondary Std. 12th examinations, she stood first in the state of Tamil Nadu.

She holds a bachelors degree in History and Social Psychology as a Gold Medalist from Presidency College, Madras and Masters in Political Science from the same college. Her stint with the Jawaharlal Nehru University started when she obtained her pre-doctoral degree in M.Phil in International Relations from JNU in 1986, securing the first rank in the university. Her Doctorate in International relations was a thesis on “PARLIAMENT AND FOREIGN POLICY IN INDIA – THE NEHRU YEARS” which she completed at the young age of 28. Further, she went on to study Peace and Conflict Studies from Uppsala University in Sweden.

Pandit has taught many papers on International Politics, Political Sociology with reference to India and Peace and Conflict Studies at Goa University.

Over her long years in the academic circle, Dr Pandit has been honoured with the Woman Educator Award from Youth Forum For Gandhian Studies in 2003, Veer Savarkar Award in Pune, 2010 and Wisetex award for Women leaders in the next decade for Education in 2004. As a well-travelled academician, the multilingual professor is fluent in six languages including Tamil, Telugu, Sanskrit, Marathi, Hindi and English and can understand Kannada, Konkani and Malayalam as well. Pandit has also been a resource at the military intelligence training school, Pune on the Asia Pacific region and India’s security perceptions since 1995.

As an author, Santishree Dhulipudi Pandit has written four books – Parliament and Foreign Policy in India (1990), Restructuring Environmental governance in Asia-Ethics and Policy(2003) and two books co-authored with Dr Rimli Basu – ‘Cultural Diplomacy: Buddhism and India‘s Look East Policy’ and ‘Retreat of the State: Implications of Drug Trafficking in Asia in 2012′.

Retiring VC Jagadeesh Kumar in an official statement has said, “It gives me pleasure to inform you that Professor Santishree Dhulipudi Pandit, department of politics and public administration, Savitribai Phule Pune University has been appointed as the next vice-chancellor of JNU. She is the first female vice-chancellor of JNU. My hearty congratulations to Professor Santishree Dhulipudi Pandit. I am handing over the charge to her today and wish her success in her new role.”