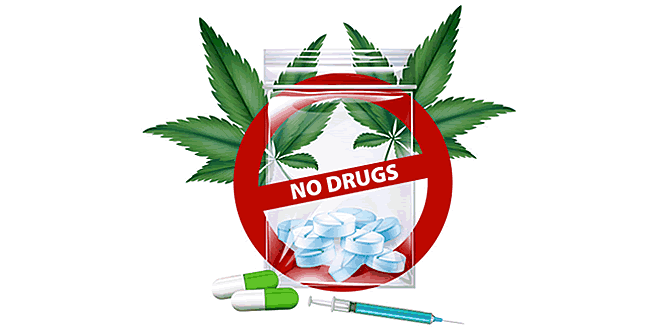 It is often referred to by Anti-Drug campaigners as 6/26. A play on Marijuana smokers “4/20” day to celebrate cannabis.

The UN’s 2007 World Drug Report puts the value of the illegal drug trade at US$322 billion a year.

International Day against Drug Abuse and Illicit Trafficking is celebrated on 26 June.

Drug abuse or drug addiction is a psychiatric, social and psychological problem that not only affects the youth of the entire world but affects a large area of people of different age. It ruins the individuals and the society in manifolds- socially, physically, culturally, emotionally and economically.

Acting on the brain of the living, the drug spawns a broad range of disorders like fear, anxiety and a sense of insecurity in them. There are certain drugs like nicotine, cocaine, caffeine, heroine, morphine, cannabis, meth, etc that stimulate the grey matter and the nervous system resulting in an enhanced alertness as well as response.

Addiction to such drugs causes a severe loss of appetite and weight, constipation, increased anxiety and irritability, sleeplessness and gradual impairment of intellectual functioning. There are other sedatives that do not speeds up the process, in fact slows down the activities of the individual and make the brain and nervous system dull. The consequences are that they arouse as pain relievers and sleep inducers.

Drug trafficking is an international illegal trade that involves the production, cultivation, dissemination and sale of substance which prohibited according to the basic laws. The United Nations Office on Drugs and Crime (UNODC) is effectively monitoring and researching illegal international drug markets in order to attain a more comprehensive study of this menace.

The United Nations Office on Drugs and Crimes in their Drug Report estimates the market of the drugs at US$321.6 billion. The illicit drug trade is estimated to be approximately 1% of the international trade. The Northern trade routes and Balkan areas are the main drug trafficking areas that link Afghanistan to the massive market of other international drug markets in Eastern and Western Continents.

It is mandatory for the United Nations Office on Drugs and Crime to help assisting the members in the struggle against illegal drug trafficking, increasing crime rates and international terror. In the annual declaration, the members of this organisation resolved to fortify their efforts to fight and combat the increasing crime rate in the illegal drug industry in all its form.

The International Day against Drug and Illicit Trafficking is observed annually on 26 June, since 1988, a date selected to commemorate the destruction of Lin Zexu, a figure in the opium trafficking and trade in Humen, Guangdong, preface to the First Opium War of China.

On 7th of December 1987 at the 93rd plenary meeting on Drug Abuse and Illicit Trafficking the United Nations’ General Assembly recalled its 40/122 resolution of 13 December, 1985 by which it decided to fight this menace. This meeting was the first step that initiated the Secretary-General to conduct an International Conference on Abuse of Drugs and its illegal distribution at the ministerial level, at Vienna in Austria.

Every year on 26 June, International Day against Drug Abuse and Illicit Trafficking is celebrated worldwide. The main agenda of International Day against Drug and its illegal production is to raise a sense of responsibility into the masses, to encourage them to raise awareness about substance abuse and its illicit trafficking and brings sense of understanding about this menace to the people who suffer due to this problem. The aim to observe this day is to increase support for prevention of the production of drugs and its use and is thus a decisive investment for the well-being of students and youth, their relatives and their communities.

It emphasizes and puts on spotlight the significant effect of the clash between the healthy and dismantled environment. This day is dedicated towards the betterment of the lives of the people who are suffering from drug abuse and other addictions. The day acts as a reminder to the masses that these people must become participants in various rehabilitation programmes.

Since 1987, International Day against Drug Abuse and Illicit Trafficking is celebrated by organizing various seminars, exhibitions and lectures in all the countries where learned researchers, doctors and NGO workers take active part to spread the awareness of drug abuse.

Masses are encouraged to get involved in the awareness raising campaigns and a lot of activities are scheduled for the entire day to disseminate the condition of drug abuse and its consequences on the individual and the family and friends around him. People feel free to come forward and share their experience of how they got addicted, what steps are they keeping in mind to stop, and what all measure must a person take to stay aloof from things like these.

The members of various organizations, rehabilitation centers and NGO’s along with the victim conduct media events, awareness campaigns and these activities let others join them either online or through real time experiences. The biggest issue with such social issues are that the victim does not feel confident to come and approach health care centre even if he wants to. Organizing such events benefits such victims and helps them acknowledge the significance of getting out and getting through this menace.

Some of the examples of events held in recent year across the world are:

Ten years ago a survey was conducted in India that revealed that there were around seven lakhs drug addicts in the country with more than one lakh in the metros of Mumbai, Delhi and Pune. Since then the government of India has introduced stringent rules to curb the menace of drug abuse and its trafficking.

They advise the Central Drug Administration in context of toxicity and quality of drugs. In addition to these, several organizations actively collaborate with the World Health organisation to prepare international standards and measures to eradicate substance abuse. Many such organizations organize events to raise awareness on the bad impacts of drugs on the day and provide special assistance and care to the people suffering from the abuse.

Russia also observes International Day against Drug Abuse and Illicit Trafficking on 26th of June every year just like all other developed and developing countries. The Federal Drug Control Services of the Russian Federation is the enforcement agency that thrusts laws to regulate, control and monitor the trafficking in drugs and its abuse in all its forms. In Russia the day is celebrated by organizing a number of activities to aware the citizens about drug abuse, its consequences and the measures that can help them.

Volunteers and various NGO’s talk about the problem openly to the entire ken of generation, raise funds, and distribute the essential materials regarding the cause. Alongside this day, few years back the Government of Russia announced the official professional holiday – the Day of Drug Control Authorities. They coordinate with the other enforcement authorities of the world to investigate the drug abuse and its trafficking worldwide.

In United States of America, the Drug Enforcement Agency organizes various events to celebrate the International Day against Drug Abuse and its Illicit Trafficking. The events are focused on fighting drug abuse, drug smuggling, and safeguarding the people from drug traffickers within the United States. The celebrations are in line with the theme of the current year as announced by the United Nations. They are also in collaboration with World Health Origination, emphasize on the eradication of substance abuse, its treatment and providing support to the families of the victim both mentally and economically.

Columbia observes the day on 26th of June with the international theme annually. Seminars are conducted on national health, criminal justice, social services and educational system to reduce the rise of drug use and other substance abuse. The country has always been working towards the decline in teen smoking. People are made aware about the initiatives of the global programmes on promoting access to controlled drugs for medicine purpose, abuse and preventive medicines.

Some More Suggestions For Celebrating:

When drug abuse wide spreads both among the richer and poorer strata of society, it is all the more imperative that there is a need for community assistance to prevent drug abuse. In the war of drug abuse, the famous saying “Prevention is better than cure” is substantially relevant. The celebration of International Day against Drug Abuse and Drug Trafficking can also include the below discussed points:

Theme Of International Day Against Drug Abuse and Illicit Trafficking

In conclusion, though the drug issue might seem to be almost impossible to eradicate, there exist many concrete actions which can be undertaken to reduce the impact of this menace over our society. The threat from drugs is too large to be ignored. We must take immediate actions to safeguard our society. Drug addiction is a draconian demon that can hold up on our society. We must never forget that a thousand mile journey never happens at one go, it takes little efforts each day.