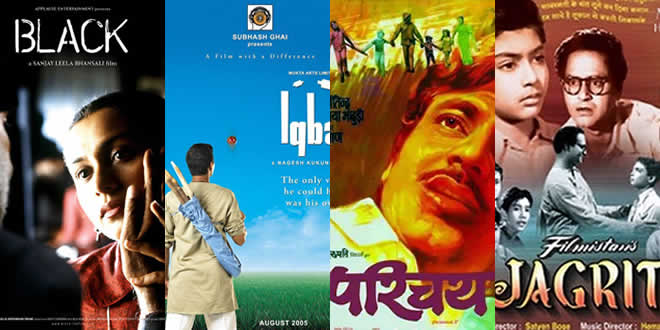 Every year on September 5, we remember the teachers who helped us in shaping our personalities over a period of time. They can be called our mentors, gurus or simply ‘favourite teachers’. On Teachers’ Day, we list out top 10 Bollywood films you can’t afford to miss. Check out what our B-Town has delivered so far in depicting the student-teacher bond on-stage:

The film is about a spoiled rich kid, Ajay (Rajkumar Gupta), who is a problem child and is sent away to a boarding school by his uncle. The boarding school is run by Shekhar (Abhi Bhattacharya), who tries to instill good values in the students using unorthodox teaching methods. He gains the students’ trust and educates them about the heritage of their country and encourages them to become model citizens.

At the boarding school, Ajay continues his ways and gets into trouble all the time, including with Shekhar. Meanwhile, Ajay meets and befriends a crippled boy named Shakti (Ratan Kumar) whose character is the opposite of Ajay’s: dutiful and obedient. Shakti tries very hard to help Ajay change his ways, but Ajay’s stubborn nature gets in the way.

Finally, one day, Ajay attempts to leave the school residence and Shakti finds out. Shakti tries to go after him and stop him, but his handicap slows him down and his earnestness to get Ajay back causes him to lose track of the heavy traffic on the road, causing him to be run over by a car and killed. This is a transformative moment for Ajay, who realizes that Shakti died because of his stubbornness. This moves him to change and become a better person. He goes on to excel in academics and sports.

Meanwhile, Shekhar’s method of teaching wins approval by the education board. He decides to leave the boarding school to spread his message elsewhere through his unorthodox but successful ways.

Madhu Shastri lives a wealthy lifestyle with her widowed dad, who is also the Principal of Adarsh Mahavidyalaya. She is in love with Vijay, a pilot, and both are expected to marry soon. Unfortunately, Vijay’s plane crashes and he passes away. The shock of this news leads to Madhu falling off the stairs, resulting in a permanent damage to her leg. Then one day a new College Professor, Pramod Sharma, enters her life, and both fall in love with each other. He encourages her to follow-up on her hobbies, especially painting, and go out more often, to which she responds positively. Then chaos breaks out into her life again when Pramod is accused by Rita, the daughter of the College Chairman, of sexually molesting her. It looks like Madhu’s life is headed for yet another heart-break.

Bombay-based Professor Amar Verma lives a middle-class lifestyle with his wife, Shobha, and 6 year old son, Kunal. When a gang-war breaks out between Veljibhai and Chhapan Tikle alias Jimmy, a number of innocent bystanders fall victim, one of whom is Kunal. This devastates the Verma family, with Shobha walking out on Amar, who devotes his life to his students. When he finds out one of his students has a stammering problem, he decides to help her, and finds out that she is the only child of gangster Veljibhai. He meets with Veljibhai, discusses the gang-war scenario, then meets with Chhapan Tikle and gets the gangster to agree on a truce so that he can take Pooja and the rest of the students on a field trip to Bangalore. Amar will soon find out that neither Veljibhai nor Chhapan Tikle have any intention of keeping any truce – and he may well have jeopardized his, Pooja’s, as well as the lives of his students – as the two gangs set out to kill each other – and anyone else who gets in their way.

A film about the battle between love and fear, between two stubborn men and their opposing beliefs and the outcome of the love stories of 3 couples.

The cathartic tale of a young woman who can’t see, hear or talk and the teacher who brings a ray of light into her dark world.

Iqbal, the deaf and mute son of a farmer, has a passion for the game of cricket and seeks the tutelage of a washed-up, alcoholic ex-player.

An eight-year-old boy is thought to be a lazy trouble-maker, until the new art teacher has the patience and compassion to discover the real problem behind his struggles in school.

Kabir Khan is the coach of the Indian Women’s National Hockey Team and his dream is to make his all girls team emerge victorious against all odds.

Two friends are searching for their long lost companion. They revisit their college days and recall the memories of their friend who inspired them to think differently, even as the rest of the world called them “idiots”.