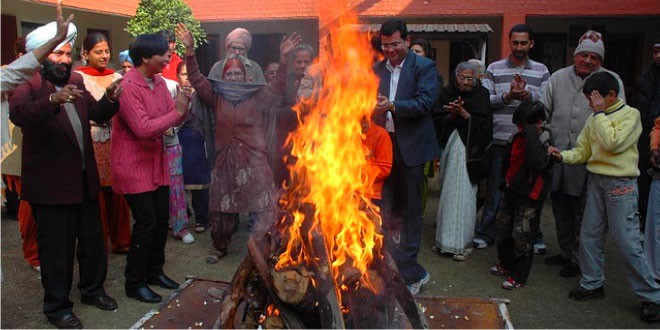 In Punjab, the breadbasket of India, wheat is the main winter crop, which is sown in October and harvested in March or April. In January, the fields come up with the promise of a golden harvest, and farmers celebrate Lohri during this rest period before the cutting and gathering of crops.

According to the Hindu calendar, Lohri falls in mid-January. The earth, farthest from the sun at this point of time, starts its journey towards the sun, thus ending the coldest month of the year, Paush, and announcing the start of the month of Magh and the auspicious period of Uttarayan. According to the Bhagavad Gita, Lord Krishna manifests himself in his full magnificence during this time. The Hindus ‘nullify’ their sins by bathing in the Ganges.

For people of Punjab, the festival of Lohri hold a great significance as it marks the harvesting season in Punjab and the end of the winter season. The main event is making of a huge bonfire which is symbolic of the homage to the Sun God for bringing in warmth. Celebrated on 13 January every year, Lohri festivities are associated with the harvesting of the Rabi crops. There is a special significance attached to the celebration of Lohri as this day the sun enters the rashi (zodiac) of Makara (Capricorn), is is considered auspicious as it signifies afresh start.

Lohri has a special significance for the agriculturists because it marks the beginning of a new financial year because on this day they settle the division of the products of the land between themselves and the tillers. Lohri assumes greater significance if there has been a happy event in the family such as the birth of a child or a marriage in the past year. The family then plays host to relations and friends and merry-making is the order of the day. Most people participate in dancing the bhangra (a folk dance) to the accompaniment of the dholak.

The festival of Lohri is linked to the atmospheric physical changes. Lohri celebrations generate a lot of bonhomie as people sit around the bonfire, talking, laughing, exchanging pleasantries, praying for prosperity, even as they make offerings of til (gingelly), moongphali (peanuts) and chirwa (beaten rice) to the burning embers. All these accounts and references point to the significance of saluting the Sun. The Sun is a symbol of plenty; it gives us all we need. Fire sanctifies our endeavor for a good life on the one hand and destroys evil spirits on the other.