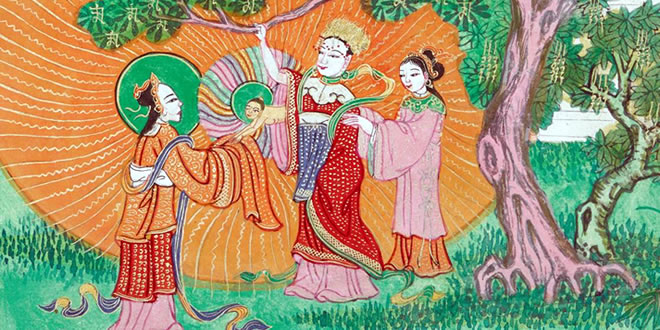 Buddhism background: Buddhism came into existence in India some 2,600 years ago when an Indian Prince, Siddhattha, became enlightened and hence came to be known as the Buddha, meaning the Enlightened One. His teaching is preserved in Buddhist scriptures known as the Tripitaka, which literally means the three baskets, namely the Vinaya or Vinaya-pitaka (monastic rules), Sutta or Suttanta-pitaka (collection of the teaching of the Buddha and His disciples) and Abhidhamma or Abhidhamma-pitaka (higher philosophy).

Buddhism is Atheistic; it does not give significance to divine beings. There are two major Schools in Buddhism: Theravada, the teaching as preserved by the elders and Mahayana, the later development. The former is practised in Sri Lanka, Thailand, Burma (Myanmar), Laos and Cambodia. The latter is more prevalent in China, Japan, Korea, Vietnam, Taiwan and Tibet.

he history of the Buddhism begins with the enlightenment of the Buddha. At the age of thirty-five, he awakened from the sleep of delusion that grips all beings in an endless vicious cycle of ignorance and unnecessary suffering (around 528 BCE). Having awakened, he decided to “go against the current” and communicate his liberating wakefulness to suffering beings—that is, to teach the Dharma.

For forty-five years, he crossed and recrossed central India on foot conveying his profound, brilliant wakefulness directly as well as by means of explanations that grew into a great body of spiritual, psychological, and practical doctrine. His enlightenment as well as the doctrine leading to it have been passed down through numerous unbroken lineages of teachers, which have spread to many countries. Many of these lineages still flourish.

At the time of the Buddha’s death (ca. 483 BCE), his Dharma was well established in central India. There were many lay followers, but the heart of the Dharma community were the monastics, many of whom were arhats [worthy ones, who attain Nirvana at the end of this lifetime]. Numerous monasteries had already been built round about such large cities as Rajagriha, Shravasti, and Vaishali.

The first to assume the Buddha’s mantle, tradition tells, was his disciple Mahakashyapa, who had the duty of establishing an authoritative version of the Buddha’s teachings. Thus, during the first rainy season after the Buddha’s death (parinirvana), Mahakashyapa convoked an assembly of five hundred arhats. At this assembly, it is said, Ananda, the Buddha’s personal attendant, recited all of the master’s discourses (sutras), naming the place where each was given and describing the circumstances.

A monk named Upali recited all the rules and procedures the Buddha had established for the conduct of monastic life. Mahakashyapa himself recited the matrika, lists of terms organized to provide analytical synopses of the teachings given in the sutras. These three extensive recitations, reviewed and verified by the assembly, became the basis for the Sutra Pitaka (Discourse Basket), the Vinaya Pitaka (Discipline Basket), and Abhidharma Pitaka (Special Teachings Basket), respectively. The Tripitaka (all three together) is the core of the Buddhist scriptures. This assembly, held at Rajagriha with the patronage of the Magadhan king Ajatashatru, is called the First Council.

In the early centuries after the Buddha’s death, the Buddha Dharma spread throughout India and became a main force in the life of its peoples. Its strength lay in its realized (arhat) teachers and large monasteries that sheltered highly developed spiritual and intellectual communities. Monks traveled frequently between the monasteries, binding them into a powerful network.

As the Dharma spread to different parts of India, differences emerged, particularly regarding the Vinaya, or rules of conduct. Roughly a hundred years after the First Council, such discrepancies led to a Second Council in Vaishali, in which seven hundred arhats censured ten points of lax conduct on the part of the local monks, notably the acceptance of donations of gold and silver. In spite of this council and other efforts to maintain unity, gradually, perhaps primarily because of size alone, the Sangha divided into divergent schools.

Among the principal schools was a conservative faction, the Sthaviravada (way of the elders), which held firmly to the old monastic ideal with the arhat at its center and to the original teaching of the Buddha as expressed in the Tripitaka. Another school, the Mahasanghikas, asserted the fallibility of arhats. It sought to weaken the authority of the monastic elite and open the Dharma gates to the lay community. In this, as well as in certain metaphysical doctrines, the Mahasanghikas prefigured the Mahayana.

Another important school was that of the Sarvastivadins (from Sanskrit sarva asti, “all exists”), who held the divergent view that past, present, and future realities all exist. In all, eighteen schools with varying shades of opinion on points of doctrine or discipline developed by the end of the third century BCE. However, all considered themselves part of the spiritual family of the Buddha and in general were accepted as such by the others. It was not rare for monks of different schools to live or travel together.

According to the Sthaviravadin tradition (known in Pali as the Theravada), which continues today in Southeast Asia, a Third Council took place in the time of King Ashoka (r. 276-232 BCE) at which the king declared the Sthaviravadin teachings the standard from which all other schools deviated. Perhaps in reaction to this, the Sarvastivadins gradually migrated to the west. They established a bastion in the city of Mathura, from which their influence continued to spread. Over centuries, they dominated the northwest, including all of Kashmir and much of Central Asia. Today a Sarvastivadin Vinaya lineage still survives in all the schools of Tibetan Buddhism.

King Ashoka was the third emperor of the Mauryan empire, which covered all of the Indian subcontinent but its southern tip. His personal espousal of the Dharma and adoption of its principles for the governance of his immense realm meant a quantum leap in the spread of the Buddha’s teaching. The imperial government promulgated the teachings. It supported the monasteries and sent proselytizing missions to the Hellenic states of the northwest and to Southeast Asia. Under King Ashoka, institutions of compassion and nonviolence were established throughout much of India. These include peaceful relations with all neighboring states, hospitals and animal hospitals, special officials to oversee the welfare of local populations, and shady rest stops for travelers. Thus he remains today the paragon of a Buddhist ruler, and his reign is looked back upon by Buddhists as a golden age.

The Mauryan empire soon fragmented, but the Buddha Dharma continued as a dominant force throughout India in the early centuries of the common era. The kings of the Satavahana dynasty of central India followed Ashoka in adopting the Dharma as a civilizing and unifying force in governing disparate peoples. King Kanishka (r. first-second centuries), whose vast Kushan empire, centered on Gandhara, encompassed northern India and large parts of Central Asia, was a champion of the Dharma, hailed as a second Ashoka.

Under his patronage, a Fourth Council was held, at which major new commentaries on the Tripitaka were written, largely under Sarvastivadin influence. Under Kanishka, the Buddha Dharma was firmly planted among the Central Asian peoples whose homelands lay along the Silk Route, whence the way lay open to China. The Kushan empire also saw the flowering of Gandharan art, which under Hellenistic influences produced Buddha images of extraordinary nobility and beauty.

Traditional accounts of the Fourth Council say that the assembly was composed of arhats under the leadership of the arhat Parshva but also under the accomplished bodhisattva Vasumitra. Indeed it was at this time, about the beginning of the second century, that the way of the bodhisattva, or the Mahayana (Great Vehicle), appeared. It was this form of the Buddha Dharma that was to conquer the north, including China, Japan, Korea, Tibet, and Mongolia.

The most visible manifestation of the Mahayana was a new wave of sutras, scriptures claiming to be the word of the Buddha that had remained hidden until then in other realms of existence. The Mahayana replaced the ideal of the arhat with that of the bodhisattva. Whereas arhats sought to end confusion in themselves in order to escape samsara, bodhisattvas vowed to end confusion in themselves yet remain in samsara to liberate all other sentient beings. The vision of spiritual life broadened beyond the controlled circumstances of cloister and study to include the wide-open situations of the world.

Correspondingly, the notion of “buddha” was no longer limited to a series of historical personages, the last of whom was Shakyamuni [Siddhartha Gautama], but referred also to a fundamental self-existing principle of spiritual wakefulness or enlightenment. While continuing to accept the old Tripitaka, Mahayanists regarded it as a restricted expression of the Buddha’s teaching, and they characterized those who held to it exclusively as Hinayanists (adherents of the Hinayana, the Small Vehicle).

Great masters shaped the Mahayana in the early centuries of the common era. Outstanding among them all was Nagarjuna (fl. second or third century), whose name connects him with the nagas (serpent deities) from whose hidden realm he is said to have retrieved the Prajnaparamita sutras, foundational Mahayana scriptures [see pages 177-213]. Nagarjuna was born in South India and became the head of Nalanda, the great Buddhist university) a few miles north of Rajagriha, which was a major stronghold of the Dharma for a thousand years. Nagarjuna’s commentaries and treatises expounded the teachings of the Madhyamaka (Middle Way), one of the two main Mahayana schools. Another great master was Asanga (fl. fourth century), who founded the other main school, the Yogachara, which focused on experience as the ultimate principle.

Through most of the Gupta period (c. 300-c. 600), the Buddha Dharma flourished unhindered in India. In the sixth century, however, hundreds of Buddhist monasteries were destroyed by invading Huns under King Mihirakula. This was a serious blow, but the Dharma revived and flourished once again, mainly in northeastern India under the Pala kings (eighth-twelfth centuries). These Buddhist kings patronized the monasteries and built new scholastic centers such as Odantapuri near the Ganges some miles east of Nalanda. Though the Hinayana had largely vanished from India by the seventh century, in this last Indian period the Mahayana continued, and yet another form—known as Mantrayana, Vajrayana, or Tantra—became dominant.

Like the Mahayana, the Vajrayana (Diamond Vehicle) was based on a class of scriptures ultimately attributed to the Buddha, in this case known as Tantras. Vajrayanists regarded the Hinayana and Mahayana as successive stages on the way to the tantric level. The Vajrayana leaped yet further than the Mahayana in acceptance of the world, holding that all experiences, including the sensual, are sacred manifestations of awakened mind, the buddha principle. It emphasized liturgical methods of meditation, or sadhanas, in which the practitioner identified with deities symbolizing various aspects of awakened mind. The palace of the deity, identical with the phenomenal world as a whole, was known as a mandala. In the place of the arhat and the bodhisattva, the Vajrayana placed the siddha, the realized tantric master.

By the thirteenth century, largely as a result of violent suppression by Islamic conquerors, the Buddha Dharma was practically extinct in the land of its birth. However, by this time Hinayana forms were firmly ensconced in Southeast Asia, and varieties of Mahayana and Vajrayana in most of the rest of Asia.