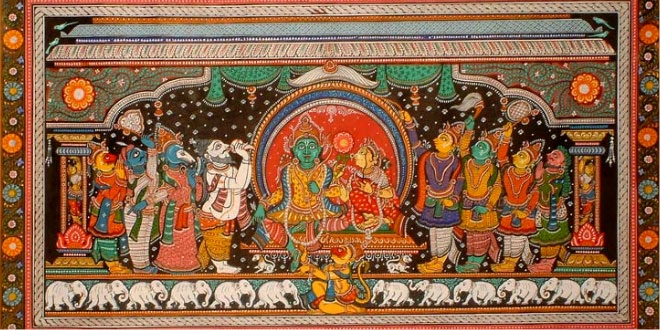 What is Significance Of Ram Navami? Salutations to Lord Rama, an Incarnation of Lord Vishnu, who is measureless, who is of the nature of pure Consciousness and bliss, who is the consort of Sita, Master of Sri Hanuman, and the Lord of the three worlds, who took His birth at His own will in order to establish righteousness, destroy the wicked and protect His devotees.

Ramnavami or the birthday of Lord Rama falls on the 9th day of the bright fortnight of the month of Chaitra (March-April). Lord Rama was born to Kaushalya and Dasharatha in Ayodhya (present-day Uttar Pradesh, India), the ruler of the Kingdom of Kosala.

Rama was the Lord Hari Himself, incarnate on earth for the destruction of Ravana. He was well accomplished, beautiful and endowed with royal marks. His glory and prowess were unlimited. He was peerless on earth. He was free from malice. He was gentle. He was the protector of all His people. He always addressed them in gentle words. He never used any harsh words even when somebody provoked Him. He held sway over the whole world.

Let Sri Rama be your ideal. Ideals are remembered and adored for the purpose of adopting them in your own life. The Ramnavami celebration or the Vasanta Navaratri every year is an opportune period for us to saturate ourselves with the spirit of Lord Rama. We love and adore our ideals because we express thereby our yearning to unite with them. In our worship of God it is implied that we should be virtuous, good and perfect even as God is. Hence the wise instruction: “One should become divine in order to be able to worship God”. One cannot be a real worshiper of Lord Rama unless one makes an honest attempt to grow in the virtues that the Lord represents. On the other hand, worship of Lord Rama is itself the surest means to develop such virtues.

One who approaches Sri Rama with love and worshipfulness becomes large-hearted, pure in spirit, good-natured and dispassionate in thought, word and deed. A true devotee of Lord Rama is His representative, with His power and His knowledge.

Lord Rama was the prince of the Ikshvaku race. He was virtuous and of manly strength. He was the Lord of the mind and the senses. Brave and valiant, He was yet gentle and modest. He was a sage in counsel, kind and sweet in speech, and most courteous and handsome in appearance. He was the master of all the divine weapons, and a great warrior. Ever devoted to the good and prosperity of His kingdom and His subjects, He was a defender of the weak and the protector of the righteous. Endowed with numerous wondrous powers of the mind, He was well versed in all sciences-in military science as well as the science of the Self.

Deep and unfathomed like the ocean, firm and steadfast like the Himalayan mountains, valiant like Lord Vishnu, He was the joy of Kaushalya. Though fierce like fire on the battlefield, He was calm like the cool breeze of the Mandara Hills, patient like Mother Earth, bounteous like the god of wealth and righteous like the lord of justice himself. In the pains and the griefs of His people, His heart swiftly sympathized with the sufferers. In the festive scenes which held them in joy, He like a father, shared their joys. By His honour and heroism, as well as by His gentleness and love for His subjects, He greatly endeared Himself to the hearts of His people. Such a great person was the Lord Rama!