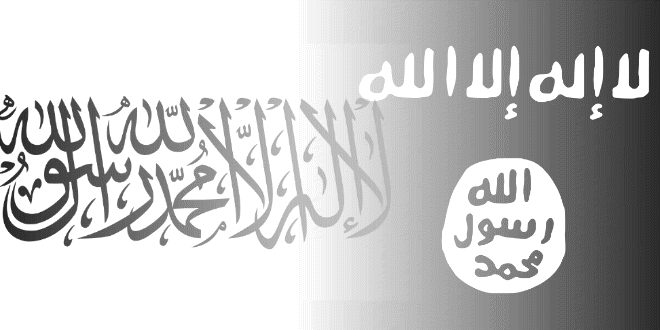 Why Taliban use white flag while ISIS uses black one?

Colours of Jihad: Why does the Taliban use a white flag while ISIS uses a black one? Explained

Does the difference of colour in the two flags means the two terror outfits abide by differing Islamic doctrines? Or is it just a mere coincidence that the two terror organisations have an inverse colour combination in their flags, perhaps to stand them apart?

Fear and chaos gripped the city of Kabul on Sunday as the Taliban effectively sealed their control of the country, bringing a swift and decisive end to the US-backed Afghan government and the 20-year-long American war in the country.

In a lightning-fast offensive following Joe Biden‘s announcement of complete withdrawal from Afghanistan, the Taliban gulped down cities after cities at a ferocious pace, leaving Kabul as the last major city under the Afghan government’s control. But on Sunday, the Taliban terrorists stormed the city and brought it under their control, overthrowing the Afghan government and forcing the embattled president Ashraf Ghani to join an exodus of his fellow citizens and foreigners.

Since the completion, shocking visuals of panic-stricken people wanting to flee the country have surfaced on the internet. Thousands of frantic people, searching for a way out of the country, flocked to the Kabul airport and mobbed the tarmac. Videos that are now doing the rounds on the internet also showed legions of Afghans jostling their way into aeroplanes, with some of them even clinging to the wheels of the planes, in their bid to fly out of the country with the Taliban poised to return to power.

As the Taliban regained their hegemony in Afghanistan, scores of terrorists belonging to the group took to the streets of Kabul brandishing machine guns and white Taliban flags. The Taliban flag consists of a white background with Islamic Shahada depicted on it in black. Interestingly, it is in exact contrast to the one used by ISIS, whose flag has a black background with Islamic Shahada printed in white.

So, does the difference of colour in the two flags means the two terror outfits abide by differing Islamic doctrines? Or is it just a mere coincidence that the two terror organisations have an inverse colour combination in their flags, perhaps to stand them apart? Let’s try to understand what the subtle distinction, if there indeed is any, between the flags of the Taliban and the ISIS mean.

The subtle difference in the flags of ISIS and the Taliban

By their deeds and declarations, both the Taliban and ISIS characterise themselves as followers and promoters of the puritan version of Islam. Both the groups insist that they are undertaking Islamic jihad to establish the supremacy of Islam in the territories they control. The ISIS’ goal of establishing an Islamic Caliphate and the rechristening of Afghanistan as the “Islamic Emirate of Afghanistan” by the Taliban is a testament to the two groups’ fidelity to the Islamic Jihad.

The Taliban, which is markedly older than ISIS, had initially used a plain white flag while warding off the invading Soviet forces during the Afghan Civil War. When it took control of Kabul in 1996 and established the Islamic Emirate of Afghanistan, the white flag became the national flag of the country, representing “the purity of their faith and the government”. Later in 1997, the Taliban added the Islamic Shahada to their flag.

The ISIS, on the other hand, is a relatively recent phenomenon, which rose to prominence after the US pullout from Iraq. One of the reasons it instantly came into notice was its penchant for using indescribable cruelty against what it perceived to be the enemies of Islam, including non-Muslims. The advent of the social media organisations also aided the rise of ISIS, which used the online platforms to the hilt to showcase its bestiality and floated the centuries-old dream of establishing an Islamic caliphate. Pictures of ISIS fighters carrying a black flag with Islamic Shahad on it were regularly shared by the terrorist group.

The history of flags of armies of Islamic Caliphates

This declaration of the ascendancy of Islam over other faiths and religions is not a modern-day construct. In fact, it is as old as Islam itself, right from the time of Prophet Muhammad, who had himself led various conquests to spread the message of Islam. According to many historical accounts, Prophet Muhammad himself led a raid and destroyed about 360 idols housed at a site in Kaaba in Mecca.

Following Muhammad’s death, his followers, with the aim of spreading Islam led armed conquest and created caliphates. While many of them approached Europe, Africa and central Asia, a sizeable chunk of them advanced towards South Asia and the Indian subcontinent. In this process, These groups were led by rulers who raised armies with harangues calling upon the faithful to join their ‘jihad’ to establish the primacy of Islam.

These rulers, like every other ruler, had flags to represent their group and their authority. Some of these rulers represented small groups, empires, and most importantly, caliphates that were essentially the Islamic States, established and governed by followers of Prophet Muhammad and his descendants. These caliphates held profound significance, given that they occupied a vast geographical area and used violence and intimidation to bring the entire world into the fold of Islam. Non-Muslim residents of these caliphates were forced to convert to Islam, failing which they were persecuted. Over time, the Arab Muslims conquered a vast expanse of land and built imperial structures to institutionalize the spread of Islam.

While the flags differ, ISIS and the Taliban have a shared aim of achieving Islamic supremacy

The history of flags used by such groups and caliphates provides a pointer to understanding why ISIS uses a black flag with white Islamic Shahada on it and the Taliban prefers a white flag with black Islamic Shahada printed on it.

There are many hadiths that mentioned that even Prophet Muhammad himself used a black flag when he led conquests. Rashidun Caliphate, the first caliphate after Muhammad’s death also used the black flag. According to a report published in The Atlantic, the Islamic State’s flag design was inspired by the flag used by Prophet Muhammad.

On the ISIS flag, “No god but God” is scrawled in white across the top and “Mohammed is the Messenger of God” is stacked in black inside a white circle. The circle’s design was supposedly inspired by a seal of the Prophet used on a set of letters that are now stored in Turkey’s Topkapi Palace. The letters are said to be written on Mohammed’s behalf. Many earlier caliphs in Central Asia inherited the prophet’s seal and it is believed that the Islamic State had aped those ancient caliphs in using the prophet’s seal in their flag.

This could be one of the reasons why the Talibani terrorists identify themselves with a white flag as it was used by the Umayyad Caliphate that is seen as the beginning of the fulfilment of Ghazwa-e-Hind prophecy, which refers to the complete conquest of India by invading Islamic forces. ‘Ghazwa-e-Hind’ is the prophecy that Islam will reign supreme in India one day and remains one of the core objectives of Pakistan as well as Islamists in India.

It is the same prophecy that numerous Islamic terror groups have faith in and what motivates them to wage war against India. The prophecy, apart from warfare, has a bloody history as it led to genocides and other crimes against humanity. On the other hand, the ISIS prefers black flag as it associates itself more with the caliphates that were Iraq and Central Asia-centered in their dominance and control.

As such, Caliphates form an integral part of the Islamic concept of Ummah, which calls for universal Muslim Brotherhood, and the notion of establishing a supra-national community with a common history. It is the manifestation of the fact that all Muslims are one and the same, the difference of nationality being only transient, to be overthrown once the aim of complete Islamisation of the non-believers is achieved.

On the surface, assorted Islamists and jihadists belonging to different terror organisations and groups may appear to be furthering their own goals. But in reality, they all are striving towards bringing the entire world under one Islamic Caliph. Besides, it’s is not just the white or black flags that represent jihadi groups with the aim of establishing Islamic caliphates. Other flags, for example, Turkey’s flag, inspired from the Ottoman Empire’s flag, is red in colour. Similarly, green is another colour that comes up a lot in Islamic history. It was the colour of the flag of the Fatimid Caliphate, the last of the four Arab caliphates.

Whatever be the colour of the flag—white, black, red or green—the mentality remains the same—establishing the supremacy of Islam. And so does the threat to the non-Muslims, who are considered as fair-game by the jihadists to be forcefully converted, oppressed, persecuted, and killed in order to achieve their objective of creating an Islamic Caliphate.