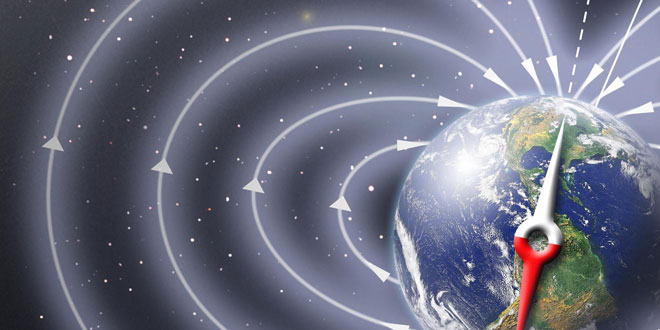 Originally, it was thought that the centre of the earth has magnetized iron deposits, which caused it to act like a huge permanent bar magnet. However, the theory failed to explain how the magnetic field had sustained itself for long, because even if there was magnetized iron in the core earlier, the core of the earth is so hot that any permanent magnet would lose its magnetism.

According to the currently accepted dynamo theory, earth’s magnetism is caused mostly by the rotating liquid outer core of the earth, partly composed of molten iron convecting through it. The theory explains the magnetic field associated with not only the earth but also the sun, stars and galaxies.

The Earth’s magnetic field is similar to that of a bar magnet tilted 11 degrees from the spin axis of the Earth. The problem with that picture is that the Curie temperature of iron is about 770 C. The Earth’s core is hotter than that and therefore not magnetic. So how did the Earth get its magnetic field?

The Earth’s magnetic field is attributed to a dynamo effect of circulating electric current, but it is not constant in direction. Rock specimens of different age in similar locations have different directions of permanent magnetization. Evidence for 171 magnetic field reversals during the past 71 million years has been reported.

Although the details of the dynamo effect are not known in detail, the rotation of the Earth plays a part in generating the currents which are presumed to be the source of the magnetic field. Mariner 2 found that Venus does not have such a magnetic field although its core iron content must be similar to that of the Earth. Venus’s rotation period of 243 Earth days is just too slow to produce the dynamo effect.

Interaction of the terrestrial magnetic field with particles from the solar wind sets up the conditions for the aurora phenomena near the poles.

Previous When is the earth nearest to the sun?
Next Eid-ul-Fitr Festive mood grips Srinagar Valley