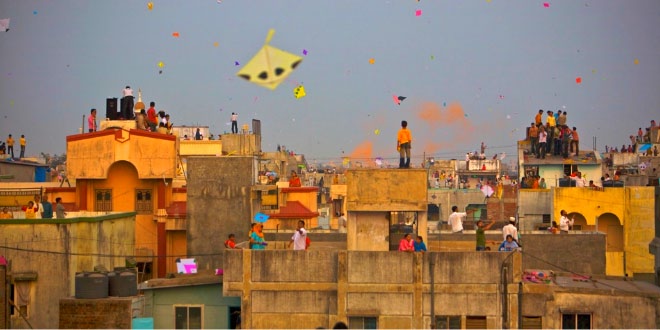 Charkhas on roads, kites in the skies of Gujarat

The charkhas (spinning wheels) are out on the roads of Vadodara and the rest of Gujarat, declaring an upcoming colourful revolution in the skies. No, they aren’t spinning cloth but preparing endless lengths of ‘manjha’ (kite strings) with coats of colour, conjuring a visual treat alongside make-shift shops selling kites, all in preparation for the Uttarayan festival on Thursday.

Uttarayan is a major festival in Gujarat and coincides with the country’s other harvest festivals like Bihu. The excitement, however, picks up much before the actual date as kites of various hues start dotting the skies from the beginning of the new year.

“Kite flying is a tradition during Uttarayan. However we don’t just fly kites on that day. It starts long before, may be two weeks prior, and continues even after. So the festivity continues even after the festival ends,” said Arun Bedekar, a businessman in Vadodara, Gujarat’s cultural and educational capital.

For children especially, this is a much awaited festival. Fourteen-year-old Harish said that he has been competing with his friends in kite flying for a week now. “Kite flying competition is very common at this time. We lose many kites in the process but that’s all right. Nothing beats the fun of flying kites at the rooftop.”

As shops selling kites of different shapes, sizes, and colours pop up on roadsides and in the markets, it’s an opportunity for brisk business. Rahim Iqbal, one of the kite and manjha sellers, said that while people start buying at least a week before the festival, sales pick up during the last four days.

“My family is involved in the kite and manjha making process. We draw a decent profit too,” Iqbal said, adding that after Uttarayan, kites are next sold during Holi in March. For the local sellers, business has also improved after the ban on Chinese strings which were giving the local variety stiff competition.

Cut out in different shapes – birds, aircraft, superheroes and favourite cartoon characters – the kites are a treat to the eyes and generate more and more enthusiasm in the build-up to the main day. Kite flying competitions are also held in many places. Ahmedabad’s kite festival during Uttarayan is a particularly big event and draws participants not just from across the country but also from different countries.

On the flip side, as the festival draws closer, the manjha of the kites pose a threat to two-wheel drivers and pedestrians on the roads. A 21-year-old student’s throat was slit by the glass-coated kite string on Thursday evening when he was riding his bike. His condition is said to be critical. A five-year-old child lost his life earlier this month because of manjha cutting his throat when he was on his way to school with his father on a two-wheeler.

Although this deadlier version of the kite string that is gummed and coated with glass powder has been banned, it continues to be sold illegally. The main aim of the glass coating is to slash an opponent’s string during kite fights in the air. But the threat it imposes on people’s lives every year is alarming. Many animal rights organisations have also protested against glass-coated manjha because of the injury it causes to birds.

Rajnikant, a cab driver in Vadodara aptly captures the essence of the event: “Uttarayan is a festival meant to be celebrated. It should not pose a threat to people’s lives or bring misery to homes and families. That just defeats the whole purpose. Everyone should just stop buying the glass-coated manjha; only then will they stop being made, and we can celebrate the festival happily.”