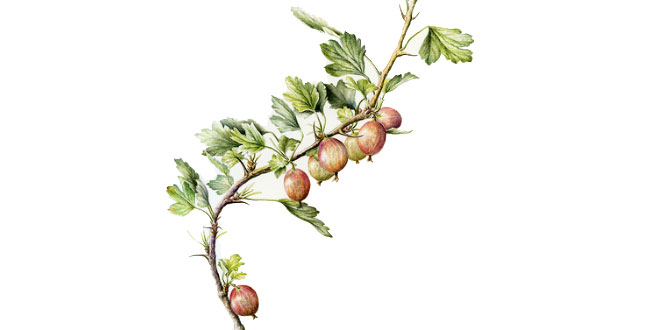 Gooseberry – Plants & Trees Encyclopedia for Kids: The gooseberry Ribes uva-crispa (syn. R. grossularia) is a species of Ribes, native to Europe, northwestern Africa and southwestern Asia. It is one of several similar species in the subgenus Grossularia; for the other related species (e.g. North American Gooseberry Ribes hirtellum).

Although usually placed as a subgenus within Ribes, a few taxonomists treat Grossularia as a separate genus, although hybrids between gooseberry and blackcurrant (e.g. the Jostaberry) are possible. The subgenus Grossularia differs somewhat from currants, chiefly in their spiny stems, and in that their flowers grow one to three together on short stems, not in racemes.

The gooseberry is a straggling bush growing to 1-3 m tall, the branches being thickly set with sharp spines, standing out singly or in diverging tufts of two or three from the bases of the short spurs or lateral leaf shoots, on which the bell-shaped flowers are produced, singly or in pairs, from the groups of rounded, deeply-crenated 3 or 5 lobed leaves. The fruit is smaller than in the garden kinds, but is often of good flavour; it is generally hairy, but in one variety smooth, constituting the R. uva-crispa of writers; the colour is usually green, but plants are occasionally met with having deep purple berries.

The varieties are most easily propagated by cuttings planted in the autumn, which root rapidly, and in a few years form good fruit-bearing bushes. Much difference of opinion prevails regarding the mode of pruning this valuable shrub; it is probable that in different situations it may require varying treatment. The fruit being borne on the lateral spurs, and on the shoots of the last year, it is the usual practice to shorten the side branches in the winter, before the buds begin to expand; some reduce the longer leading shoots at the same time, while others prefer to nip off the ends of these in the summer while they are still succulent.