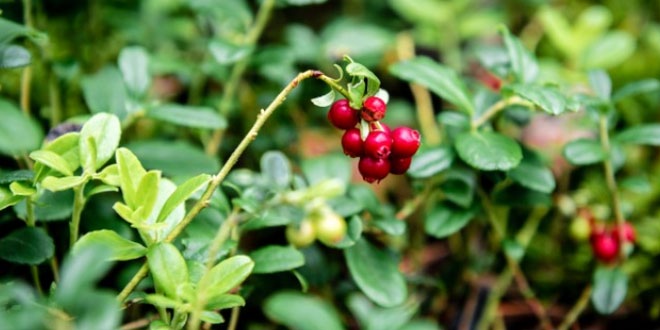 Cranberry — Cranberries are a group of evergreen dwarf shrubs or trailing vines in the genus Vaccinium subgenus Oxycoccus, or in some treatments, in the distinct genus Oxycoccus. They are found in acidic bogs throughout the cooler parts of the Northern Hemisphere.

Cranberry are low, creeping shrubs or vines up to 2 m long and 5 to 20 cm in height, with slender, wiry stems, not thickly woody, and small evergreen leaves. The flowers are dark pink, with very distinct reflexed petals, leaving the style and stamens fully exposed and pointing forward. They are pollinated by domestic honey bees. The fruit is a false berry that is larger than the leaves of the plant; it is initially white, but turns a deep red when fully ripe. It is edible, with an acidic taste that can overwhelm its sweetness.

Cranberry –  a major commercial crop in certain US states and Canadian provinces (see “Cultivation and Uses” below). Most cranberries are processed into products such as juice, sauce, and sweetened dried cranberries, with the remainder sold fresh to consumers. Cranberry sauce is regarded an indispensable part of traditional American and Canadian Thanksgiving menus and European winter festivals.

Since the early 21st century within the global functional food industry, there has been a rapidly growing recognition of cranberries for their consumer product popularity, nutrient content and antioxidant qualities, giving them commercial status as a novel “superfruit”.

Cranberry have been eaten by Arctic peoples for millennia and remain a very popular fruit for wild harvesting in the Nordic countries and Russia. In Scotland, the berries were originally wild-harvested but with the loss of suitable habitat, the plants have become so scarce that this is no longer done. In North America, Native Americans were the first to use cranberries as food. Calling the red berries Sassamanash, natives may have introduced cranberries to starving English settlers in Massachusetts who incorporated the berries into traditional Thanksgiving feasts. American Revolutionary War veteran Henry Hall is credited as first to farm cranberries in the Cape Cod town of Dennis around 1816.

How does Cranberry grow?

Cranberries are harvested in the Autumn when the fruit takes on its distinctive deep red color. This is usually in late September and into October. To harvest cranberries, the beds are flooded with six to eight inches of water. A harvester is driven through the beds to remove the fruit from the vines. For the past 50 years, water reel type harvesters have been used. Harvested cranberries float in the water and can be corralled into a corner of the bed and conveyed or pumped from the bed. From the farm, cranberries are taken to receiving stations where they are cleaned, sorted, and stored prior to packaging or processing.

About 95% of cranberries are processed into products such as juice drinks, sauce, and sweetened dried cranberries. The remaining 5% is sold fresh to consumers. Cranberries destined for processing are usually frozen in bulk containers shortly after arriving at a receiving station. To allow air movement deterring decay, cranberries for fresh market are stored in shallow bins or boxes with perforated or slatted bottoms. Because harvest occurs in late Autumn, cranberries for fresh market are frequently stored in thick walled barns without mechanical refrigeration. Temperatures are regulated by opening and closing vents in the barn as needed.