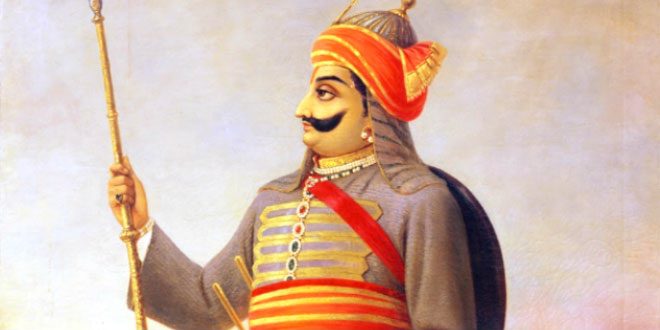 Maharana Pratap Jayanti: Maharana Pratap (May 9, 1540 – January 29, 1597) was 16th century King who ruled Mewar, a state in north-western India. He was born on 9th May 1540 in Kumbhalgarh, Rajasthan. His father was Maharana Udai Singh II and mother was Rani Jeevant Kanwa. He was the eldest among 25 brothers and 20 sisters and was the 54th ruler of Mewar. He belonged to the Sisodiya Rajput clan. 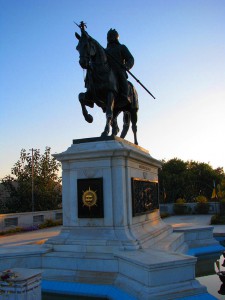 From childhood Rana Pratap had the passion that a Kshatriya king needs to possess. In 1568, when Maharana was just 27 years old, the Mughal emperor Akbar conquered Chittor. Maharana Udai Singh, his father decided to leave Chittor and moved to Gogunda. Seeing this as opportunity, his half brother Jagmal took away the throne. When Jagmal was unable to manage affairs he joined the army of Akbar with an idea to take revenge with Maharana Pratap.

Maharana faced many struggles in his career. He kept on fighting with Akbar all his life. Akbar tried several ways to win over Maharana Pratap but he was always a failure. Maharana could not forget when Akbar killed 30,000 unarmed residents of Chittor only because they refused to convert to Islam. This made Maharana revolt against Akbar and he followed strict codes of Kshatriyas to fight with Akbar.

The legend Maharana Pratap was a true patriot who initiated the first war of independence. Maharana was born on May 9th 1540 in Kumbhalgarh in Rajsamand district of Rajasthan to Maharana Udai Singh II and Rani Jeevant Kanwar.

Maharana Pratap, has gained amazing respect and honour as he is seen as an epitome of valor, heroism, pride, patriotism and the spirit of independence.

Special puja and processions are held in his remembrance on Maharana Pratap Jayanti day everywhere. Several cultural programs such as debate are also organized.

To honor the first freedom fighter of India, Maharana Pratap who stood and fought bravely till his last breath against the dominance of Mughal Empire. Maharana Pratap Jayanti (Birth Anniversary) is always celebrated with great enthusiasm in Udaipur.

Maharana Pratap jayanti is a celebration of birth day of a well known king of Mewar region of Rajasthan. It is the occasion to remember a brave son of Mewar who fought against the enemy of this brave land of Mewar.

Maharana Pratap had born as on 3rd day of Sukla Paksha of Ashadh month of Hindu calendar. That is the time of to enjoy a famous Haldighati Fair of Mewar.

Maharana Pratap was the most popular ruler of Mewar region of Rajasthan.

His name is fixed in the book of history of Rajasthan in golden words. He was one of the kings of Mewar who spent his whole life to survive the prestige of Mewar.

Haldighati is not only well known for its historic battle but also most popular among the people for a brave sacrificed of an animal which was named as Chattak. It is the place where a horse Chattak who stood during the all time of his life to survive his owner Maharana Pratap in battle of Haldighati. Haldighati fair organizes each of the year in district Rajasthan of the state of Rajasthan.

On June 21, 1576 (June 18 by other calculations), the two armies met at Haldighati, near the town of Gogunda in present-day Rajasthan. While accounts vary as to the exact strength of the two armies, all sources concur that the Mughal forces greatly outnumbered Pratap’s men (1:4). The battle of Haldighati, a historic event in the annals of Rajputana, lasted only four hours. In this short period, Pratap’s men essayed many brave exploits on the field. Folklore has it that Pratap personally attacked Man Singh: his horse Chetak placed its front feet on the trunk of Man Singh’s elephant and Pratap threw his lance; Man Singh ducked, and the mahout was killed. 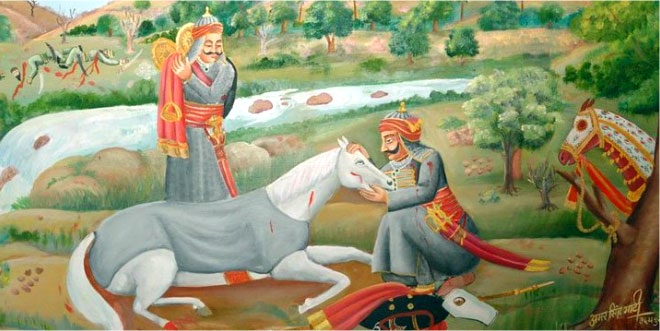 However, the numerical superiority of the Mughal army and their artillery began to tell. Seeing that the battle was lost, Pratap’s generals prevailed upon him to flee the field ( so as to be able to fight another day. Myths indicate that to facilitate Pratap’s escape, one of his lieutenants, a member of the Jhala clan, donned Pratap’s distinctive garments and took his place in the battlefield. He was soon killed. Meanwhile, riding his trusty steed Chetak, Pratap made good his escape to the hills.

But Chetak was critically wounded on his left thigh by a Mardana (Elephant Trunk Sword) while Pratap had attempted to nail down Man Singh. Chetak was bleeding heavily and he collapsed after jumping over a small brook few kilometers away from the battle field. When Pratap’s general donned Pratap’s clothing and armour, it went unnoticed, thanks to the chaos of the war, but for two Turk knights from the Mughal army. They could not communicate it with others in their group, due to the linguistic barrier (the appropriate language would have been Persian, Marwari or Arabi, given the composition of the Mughal army). They immediately followed Pratap without wasting time. The moment they started chasing him, Pratap’s younger brother Shakti Singh, who was fighting from the Mughal side, (he had some disputes with Pratap at the time of Pratap’s coronation; hence he had defected and gone over to Akbar’s court) realized that his own brother was under threat. Pratap’s general’s sacrifice had already been discovered by him. He could not help but react against a threat to his own brother. He followed the Turks, engaged them in single combat and killed them. In the meanwhile, Chetak collapsed and Pratap saw his brother Shakti Singh killing the two Mughal riders. Saddened by the loss of his beloved general and horse, he embraced his brother and broke into tears. Shakti Singh also cried and asked for his brother’s pardon, for having fought as his enemy. Pratap pardoned him (later on he was given a huge estate near Chittor). Shakti Singh then offered him his own horse and requested him to get to a safe place. This incident is famous in Rajasthani folklore, a song “O Neele Ghode re Aswar” (O Rider of the Blue Horse) mentions it.

The impact of the battle on the Mughal army was also significant. In terms of numbers the Mughal army suffered heavier losses. This was also because of the intensive arrow showers by the Bhil tribes of the surrounding mountains who had sided with Pratap. To honour their contribution, a Bhil warrior was placed next to Pratap in the Royal Coat of Arms of Mewar.

The battle of Haldighat is considered to be the first Major breakthrough of Rajputs against the Mughals since the Second Battle of Khanwa in 1527, which was fought between Rana Sanga grandfather of Maharana Pratap, and the Mughal Babur grandfather of Akbar. It is regarded with a degree of significance by many Rajput families.

An impressive bronze statue of Maharana Pratap and his favorite and loyal horse, who fiercely protected his master and stood by him till his last breath, stands at the top of Moti Magri, overlooking Fateh Sagar. Local habitants climb the hill to pay homage to Maharana Pratap and his faithful horse Chetak, who were killed in the battle of Haldighati. Also there are the ruins of one of the first modest palaces of Udaipur and also a charming Japanese rock garden. The Memorial has the first Light & Sound program in Rajasthan, that displays the glorious 1400 years of Mewar’s history. All these are highly decorated with lights during the Maharana Pratap Festival. People from across the world come to visit the place.