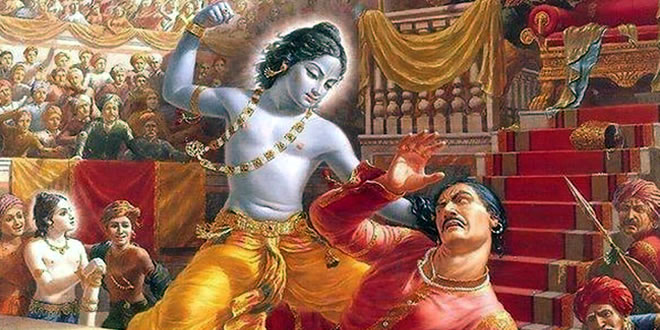 This day falls on 10th day of Shukla Paksha of Kartik month of Hindu Lunar Calendar. It is celebrated to commemorate the killing of King Kansa, the ruler of Mathura by Lord Krishna. The town of Mathura comes alive and is colorful on this day. Various cultural activities like dance, music and dramas portraying the dalliances of Lord Krishna and enactments of many of his legends takes place.

Kamsa Vadh is celebrated in Mathura and other places by making effigies of Kamsa and people gather around for thrashing it as an enactment of the deed done by Lord Krishna. It is celebrated as a commemoration of freedom from him and also of Lord Krishna’s bravery. Classical and art performers reenactments of this event through music, dance and drama.

Kansa was the son of King Ugresena and Queen Padmavati, future heir of Mathura and brother of Devaki. Kansa wanted to become king and decided to over throw his father by marrying the two daughters, Princesses Asti and Prapti of the neighboring King Jarasandha of Magadha province and using their army for this purpose. He did this under the confines of the palace and the common people of Mathura were not informed of this. King Kansa now occupied the kingdoms of the Yadu, Bhoja, and Andhaka dynasties and the kingdom of Surasena, and also made alliances with all the other demonic kings like the Pralamba, Baka, Canura, Trnavarta, Aghasura, Mustika, Arista, Dvivida, Putana, Kesi and Dhenuka.

Kansa was informed of the prophecy by saint Narada that his sister s eight son would kill him, so he imprisoned his sister and killed 6 of their sons immediately after birth. The seventh and eight child to be born were Balarama and Lord Krishna. They were placed in to Yashoda and Rohini s care through divine assistance where Vasudeva was to carry both the babies to the cattle herd chief Nanda in Gokula right after their birth, where Nanda’s wife Yashoda and was to give birth to a daughter. He was to exchange his boys and bring Yashoda’s baby daughter back to the prison.

With Lord Vishnu s grace nothing could stop Vasudeva to complete the task set by Lord Vishnu himself. King Kansa was not aware of any of this and when he heard that his sister Devaki had given birth to a beautiful girl on Ashtami, he still wanted to kill the baby out of fear. When he tried to kill the girl baby, she transformed in to Goddess Shakti, the Yogamata and warned him that the person intended to kill him had already been born.

On hearing these words, King Kansa planned to kill Lord – Child Krishna by sending his demon associates. Over the years King Kansa had sent out demons like Putana, Kaliye, Bakasura and Aghasura to kill Lord Krishna. They had all disguised themselves as cow herder, serpent, giant bird respectively while trying to kill Krishna but they had all met their demise in his hands.