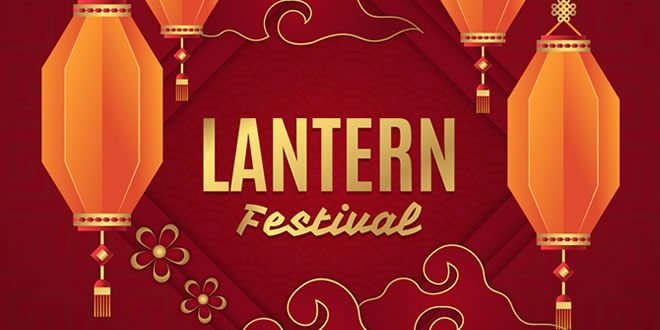 The Lantern Festival is a 2,000-year-old Chinese tradition that closes out the Lunar New Year season. This observance falls on the fifteenth day of the first month in the Chinese lunar calendar and changes each year.

The Lantern Festival (called Yuan Xiao Jie or Teng Chieh in Chinese) takes place under a full moon and marks the end of the Chinese New Year season. It has roots in Hinduism and Buddhism and is celebrated in countries such as China, Taiwan and Thailand and in Asian immigrant communities around the world. Business and other official closings depend on the region.

Celebrations feature fireworks and folk dancing. Highlights include traditional public performances such as the dragon parade and the lion dance. The special food associated with the Lantern Festival is yuanxiao, a round, sweet, stuffed dumpling made with sticky rice flour that symbolizes family unity, completeness and happiness.

People hang paper lanterns along streets and around homes and carry them around parks and outside temples. Lanterns may appear in the shapes of dragons, birds or other animals. People write auspicious phrases on the lanterns to ward off evil spirits and attract good ones; some will decorate their lantern with a riddle and award a prize to the first person who solves it. The light given off by the lanterns is said to attract heavenly spirits and allow celebrants the chance to see them.

The Lantern Festival has origins in the beliefs of Brahmanism, a branch of the Hindu religion, and is generally thought to have evolved during the first century into an observance honoring Buddha (Buddhism having grown out of Hinduism). The Chinese have celebrated the Lantern Festival for nearly 2,000 years since the Han Dynasty (206 B.C.E.—221 A.D.). Although it began as something of a religious observance, fireworks and riddle-guessing contests were incorporated into celebrations over time to make the occasion more festive. The lantern, a source of light, is a traditional symbol of the lengthening days of spring. The legend of the Jade Emperor, wherein a village was spared a deity’s wrath by lighting lanterns, is also associated with this festival.