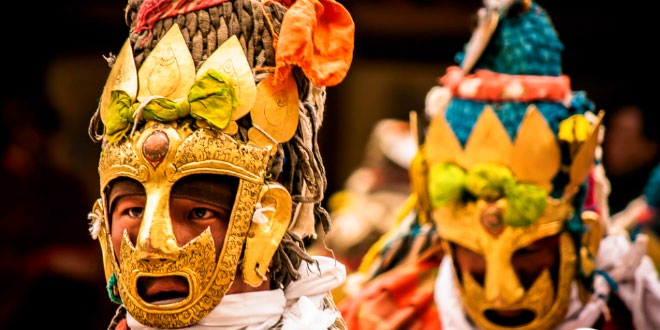 Hemis Festival — The courtyard of Hemis Gompa – the biggest Buddhist monastery in Ladakh is the stage for the famous ‘Hemis’ festival that celebrates the birth anniversary of Guru Padmasambhava.

The colorful two-day pageant falls on the 10th day (Tse-Chu) of the Tibetan lunar month. The local people are seen dressed up in their finest traditional garb for the occasion. Lamas called ‘chhams’ perform splendid masked dances and sacred plays to the accompaniment of cymbals, drums and long horns. The head lama presides over the function. The festival takes an auspicious turn every 12 years in the Tibetan Year of the Monkey, when the two-storey high ‘Thanka’ depicting Padmasambhava is displayed. This famous ‘Thanka’, richly embroidered with pearls and semi-precious stones, is due to be displayed at this years festival i.e in 2004. A colorful fair, displaying some beautiful handicrafts, is the special highlight of the festival. 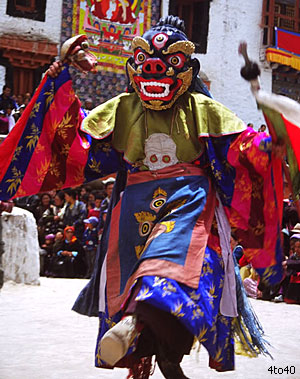 40 km from Leh, it is the wealthiest, best-known and biggest gompa of Ladakh. Its popularity stems from the major annual festival held here in summer. The festival is in honour of Guru Padma Sambhav’s birth anniversary. It also has the largest Thangkha in Ladakh, which is unfurled, once in 12 years (next in 2004) Hemis was built in 1630 during the reign of Sengge Namgyal, an illustrious ruler of Ladakh. It flourished under the Namgyal dynasty for the royalty favored the Drugpa sect, which managed the monastery.

It is divided into two, the assembly hall on the right and the main temple on the left. The hall Dukhang is also used as “green room” by the dancers during the festival. The temple is known as Tshogkhang. The varandahs have a surfeit of frescoes, among them the Buddhist ‘wheel of life’ (Kalachakra) and the lords of the four quarters, besides the prayer wheel.

Splendid masked dances are performed to the accompaniment of cymbals, drums & long horns. A colorful fair, displaying some beautiful handicrafts, is the special highlight of the festival.

Why Is Hemis Festival Celebrated?

Hemis Festival of Ladakh is celebrated every year on the birth anniversary of Guru Padamsambhav. It is a two-day celebration which marks the victory of good over evil. The legend has it that Lord Padamsambhav defeated the dark forces with the help of Vajrayana Buddhism. And, therefore, the people of Ladakh celebrate the day of his birth on a huge scale.

Watch the valleys, mountains and rivers thriving on the beats of trumpets, cymbals, and drums as the locals enter the frenzied two-day celebration of Hemis Festival in Ladakh. Hemis Festival is celebrated in Hemis Monastery. The monastery dates back to 300 years and is under the rule of Namgyal!

Hemis Monastery Festival begins with the followers seeking blessings of a portrait of the Guru early morning and musicians playing music while the ceremony is going on. But what makes the festival most attractive is the masked dance performance called Cham. It is a slow dance and depicts the war between good and evil wherein the good wins! The sight is jaw-dropping as the colorfully dressed Lamas bring enthusiasm in the whole crowd.

Apart from that, there is a fair where you can buy Tibetan souvenirs and the festival is the best time to see the people dressed up in their best traditional attires. Totally, a sight to behold!

Here is the list of the main highlights that Hemis in Ladakh is famous for!