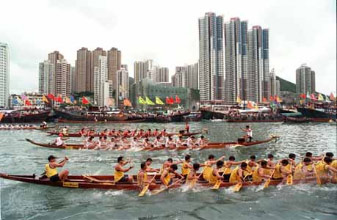 Dragon Boat Festival — There are few sites more spectacular than a fleet of boats decorated to look like dragons racing to the finish line, paddlers moving their oars in one fluid motion while the drummer thumps out a steady rhythm. Once practically unknown outside the Chinese community, today you’ll find enthusiastic crowds cheering on racers participating in dragon boat festivals everywhere from Rome, Italy to Seattle, Washington. But the dragon boat festival is much more than an athletic event. It is the third largest festival in the Chinese calendar, following the Spring Festival and the Mid-Autumn Moon festival. And, like these two other traditional holidays, food plays an important and symbolic role in the festivities.

Legend Behind the Dragon Boat Festival

Although the races are held on different dates throughout the world, the dragon boat festival officially falls on the fifth day of the fifth month of the Chinese lunar calendar (June 12th in 2013). There are several legends surrounding the origin of the dragon boat festival, which is also called the “Festival of the Double Fifth.” Traditionally, the fifth lunar month is supposed to be fraught with danger, as the forces of ying and yang are out of balance. One theory is that dragon boat racing began as a way of paying homage to the God of Water so that the farmers would have good crops. During that month, people would also hang calamus and moxa on their front doors in an attempt to ward off evil spirits.

But bad as the fifth month was, the fifth day of that month was especially inauspicious. It was said that a child born on that day would be extremely difficult to raise, bringing his parents much grief. Another legend surrounding the origin of the dragon boat festival concerns a man who had the misfortune to be born on this unlucky day. Tian Wen survived murder attempts and banishment by his father to eventually to become the Prime Minister of a Chinese state. Determined that no other child should suffer similar mistreatment, he ordered that the fifth day of the fifth month be considered a regular day, as propitious as any other. Another theory, put forth by Professor Wen Yiduo, is that celebrations were held on this day as a sacrifice to the ancient dragon, in honor of the beast’s birthday.

But the most popular story revolves around the life and death of one of China’s most famous citizens. Qu Yuan was both a statesman and China’s first known poet. During his lifetime, he served as Minister of Law and Ordinance for his home state of Chu in southern China. Unfortunately, Qu Yuan lived during the Warring States period (481 – 221 B.C.), when larger, more powerful states were trying to consolidate their power. One of these states, Qin in the north, was determined to control the state of Chu. Qin leaders gave the King of Chu a peace treaty to sign, which they had no intention of honoring. Suspicious of their motives, Qu Yuan advised the king not to sign the treaty. Unfortunately, the king was threatened by Qu Yuan’s stature, believing the poet was trying to gain greater political power in the government. Not only did he sign the treaty, but he banished Qu Yuan to a remote region in Hunan province. Eventually, Chu was defeated by the stronger Qin state.

It is thought that the news of Chu’s defeat destroyed Qu Yuan’s will to live. As a result, on the fifth day of the fifth lunar month in 278 B.C., he committed suicide by grasping a large rock and throwing himself into the Miluo River.

Local fisherman raced to their boats to recover his body, beating drums and splashing their paddles on the water to scare away the fish. But it was all to no avail. In one version of the legend, they began throwing rice on the water as a sacrifice to their dead hero, and to nourish his spirit. One night, the image of Qu Yuan appeared to one of the fisherman in a dream. In the dream, the poet revealed that the fish were eating the rice. He asked that the rice be wrapped in silk to protect it. Later, the silk was replaced with bamboo leaves.

In another version, the rice packets were meant for the fish, in an effort to keep them from devouring Qu Yuan’s body. But whichever version you choose to believe, the death of Qu Yuan gave rise to both the dragon boat races and celebrating the day with zongzi – delicious dumplings made with glutinous rice that are stuffed in bamboo leaves.

“Many a heavy sigh I heaved in my despair, Grieving that I was born in such an unlucky time…I yoked a team of jade dragons to a phoenix-figured car, And waited for the wind to come, to soar up on my journey.” (Qu Yuan, ancient Chinese poet)