With at least seven major faiths and a large agricultural population, India seems to celebrate one festival or another every day in the year. In addition, each seasonal change – such as the coming of spring, the monsoon and the harvests – is celebrated. Yet another factor here is the strength of the bonds of familial affection and concern. Festivals further strengthen these ties across the extended family system which embraces in-laws, distant relatives and friends.

Indian festivals can be specific to a region, or the same festival will be celebrated in different places in a slightly different form. In fact, every community has its own special emphasis and unique form of expression in the celebration of a festival.

Officially, India follows the Gregorian calendar. However, the older lunar and solar calendars determine the dates of festivals and thus they vary each year. Three secular national holidays are fixed: 26 January is Republic Day, 15 August is Independence Day and 2 October is the birthday of Mahatma Gandhi.

The January sugarcane harvest in North India is celebrated in the Lohri festival, an occasion for joy and thanksgiving for the bounty of nature. There is music, song and the sharing of sweets made out of the new sugar and sesame seeds. In South India, where rice is the staple food, the harvest festival is called Pongal; it is Bihu in Assam and Makara Sankranti in other parts of the country. A delightful occasion in South India is Mattu Pongal, also in January, when cattle (and cars, tractors and buses) are washed and decorated with garlands and honoured for their hard work in bringing in a good harvest.

Republic Day is celebrated with massive parades on 26 January to mark the day in 1950 when India was declared a republic and the Constitution of India came into effect. In New Delhi, the army, navy and air force parade is followed by a display of floats with dancers from different parts of India. The government hands out awards to eminent people in the fields of science, the arts and social work, and there is a special Bravery Award for children. The event, which takes place in New Delhi and in every state capital, is televised. Tickets and passes are available for those who want to watch it live. The curtain rings down two days later with a Beating of the Retreat, an impressive hour-long performance of music and marching by the combined bands of the armed forces.

Basanta Panchami and Holi are the major spring festivals, held in February and March. They are best experienced in North India, where the changing seasons are more noticeable. Homes are cleaned, and on the eve of Holi, huge bonfires burn away the old year and usher in the new. Children play with colored powders and water, visit the homes of relatives and romp in the streets splashing colors on everyone. This ancient ritual has inspired some lovely and often bawdy – songs which can be heard in the villages. By noon an exhausted silence reigns and the festivities are over. 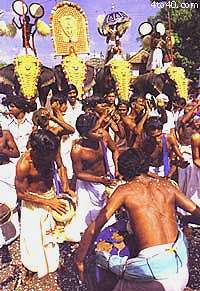 Soon after Holi, on 13 April, there is a festival of music and dance especially important to Sikhs and Punjabis. By April and May, the gulmohar, laburnum and cassia trees are in flower and it is time for Pooram, celebrated at Trichur (Kerala) with processions of temple elephants carrying ceremonial umbrellas to the accompaniment of music. Soon the summer heat becomes unbearable even for the gods, and in the Rath festival at Puri (Orissa), the presiding deities – Jaganath, Balaram and Subhadra – are taken from the temple to their summer abode in huge wooden chariots pulled by thousands of people.

Before the monsoon there are occasions when it is auspicious to bathe in the Ganges and other rivers. Once the rains come, there are further celebrations. Nowhere in the world does rain inspire so much spontaneous music and poetry as in India. During Teej, celebrated in honour of Parvati (the wife of Shiva), it was customary for woman and young brides to return to their parents’ home. Swings were hung on trees and in the houses, and the girls would get together with their old friends. Far from the watchful eye of their in-laws and husbands, the women abandoned themselves with their companions as in former days. In North India during July and August, Raksha Bandhan is an occasion for brothers to reiterate their affection for and their pledge to protect their sisters, who tie a delicate rakhi thread (now made with gold and tassels) to their brothers’ wrists as a symbol of affection. They, in turn, present their sisters with a gift or money, symbolizing their protection.

Janmashtami is a nationwide festival in honor of the god Krishna, represented as a naughty child, cowherd, divine lover and destroyer of evil. You can observe Janmashtami at Mathura, Krishna’s birthplace, or at any Vishnu temple. Like at Christmas, houses are cleaned and devotees decorate Krishna’s image with dolls and toys for his enjoyment. Other festivals for the gods include Sivaratri (for Shiva) in February-March, an occasion for fasting and prayers; Ramanavami (for Rama, the hero of the Ramayana) in March-April; and Buddha Jayanti and Mahavir Jayanti from March to May.

India’s Independence Day is 15 August. The prime minister addresses the nation from the ramparts of the Red Fort in Delhi and there are celebrations throughout the country.

Onam is an important festival in Kerala which marks the end of the monsoon (August-September). It features boat races in which elegant snake-boats decorated with flowers and flags and manned with 30 to 40 rowers compete, while crowds line the banks of the river and cheer them on.

In August and September, Maharashtra celebrates Ganesh Chaturthi in honour of Ganesh, the god of wisdom and remover of obstacles. Every new venture, journey or celebrations in India begins with the propitiation of Ganesh. He is an endearing deity, with his elephant head and prosperous round belly. He is known to love sweets. The clay images that are made for this occasion are carried in huge processions and immersed in the sea are a river, a symbolic return to the earth and nature.

Ramadan is a month-long period of piety and fasting for Muslims, during which time it was believed the Koran was given to man through the Prophet Muhammad. The last day of Ramadan, Id-ul-Fitr, is celebrated with feasting. On Id-Bakrid, Abraham’s sacrifice of his son to God is remembered with feasting and alms-giving.

In October and November, Dussehra (dus means ‘ten’) is a ten-day festival that commemorates Durga’s conquest of the mighty buffalo-demon, Mahisha. As the legend goes, all the gods co-operated to create this perfect goddess, whose strength exceeded all of theirs combines. Shiva gave her his trident, the wind god his bow, Indra his thunderbolt, and so on. The festival is popular in eastern India, and cities like Calcutta teem with processions and music.

Another legend runs through Dussehra and Diwali, that of Rama, an incarnation of Vishnu. During Dussehra the Ramayana is narrated and dramatized in parts of India in the Ram-lila (the life story of Rama). Rama is the heir-apparent to the throne of Ayodhya who, by the jealous intrigues of a step-mother, is exiled for 14 years. Rama, his wife Sita and brother Lakshmana wander off into the forest; there Sita is kidnapped by the mighty ten-headed king of Lanka, Ravana. Ram, in an alliance with Hanuman, lord of the monkeys, invades Lanka and in a fierce battle Ravana is vanquished. On the tenth day of Dussehra, effigies of Ravana are burnt to celebrate the victory. Diwali marks the triumphant return of Rama, Lakshmana and Sita to their kingdom. To light up their way home each year, homes are illuminated with traditional oil lamps, fireworks are set off, sweets are distributed, and there is general rejoicing with family and friends. The festival also marks the moonless night before winter sets in, and at Diwali Lakshmi, the goddess of wealth and prosperity is also honoured. People gamble at this time to test their luck for the new year.

Christmas in India is celebrated with the exchange of presents and the singing of beautiful hymns in Indian languages.