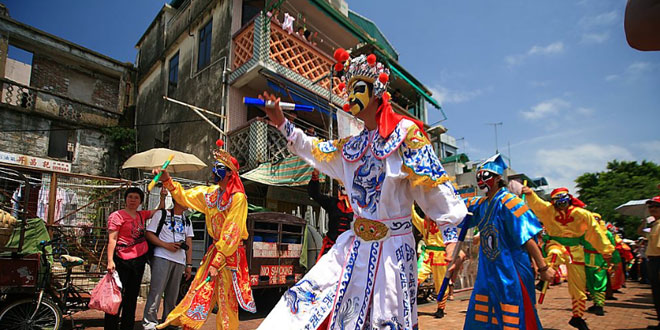 Unless you’ve visited Hong Kong, chances are you haven’t heard of Cheung Chau, a tiny, dumbbell-shaped island located about 12 kilometers south of the Hong Kong mainland. A fishing community that depends almost solely on the sea for its living, Cheung Chau is a curious mix of the modern and the traditional. Water taxis and ferries compete with sampans for space in the crowded harbor. (Visitors who take the one hour ferry ride from the mainland are often surprised to discover that motorized vehicles are not allowed on the island). But what makes Cheung Chau truly distinct is that it holds the world’s only annual bun festival.

Festival of the Bun Hills 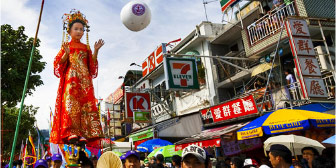 That’s right, a bun festival. Also known as the “Festival of the bun hills,” the four-day celebration includes parades, opera performances, and children dressed in colorful costumes. But the most spectacular feature by far is the bun towers – large bamboo structures several stories high, piled with sweet buns. The bun towers are located in front of the Pak Tai temple, built in 1783 to commemorate the Pak Tai, the Taoist God of the Sea. There are several temples in Hong Kong honoring the Pak Tai who, according to legend, threw the prince of evil out of heaven. of greater importance to Cheung Chau’s inhabitants, however, is his reputed role in driving away pirates who had launched a series of attacks on the island. According to local lore, the attacks ceased once the temple was built.

The buns, which have been blessed, are handed out to the people on the final day of the festival. Traditionally, men competed in a race to climb up the towers and grab as many buns as possible. In 1978, one of the towers collapsed, injuring several people. The tragic accident forced authorities to cancel the competition. However, organizers revived the competition in 2005. To ensure the safety of participants and spectators, the towers are now made of steel, covered with a bamboo scaffolding to look more authentic. Prospective bun-climbers must take a training course to learn basic mountaineering skills. At the end of the training period, twelve finalists are chosen to compete in the bun scrambling competition. Following the individual race, several teams compete in a relay.

Beginning in 2007, replica buns have been used in the bun scrambling competition. This is to ensure the competitor’s safety, as real buns could become slippery in wet weather. However, festival-goers will still be able to collect buns from the three main bun towers.

The origins of the bun festival are unclear. According to one source, it commemorates the islanders killed by pirates, and whose spirits may still be wandering the island. As with the Hungry Ghost Festival, islanders provide food and burnt paper offerings to placate these wondering souls. It is probably also designed to pay tribute to Pak Tai. The festival falls just before the start of the fishing season, so honoring the god is one way to ensure fair weather and a good catch.

In 2013, the main action takes place on the weekend of May 14 – 18th. Traditionally, the whole island goes vegetarian for the three days of the festival – even McDonalds sells vegetarian burgers.  in 2017, The Cheung Chau Bun Festival is from April 30 to May 4, 2017.

If you’re planning to visit Hong Kong in May, it’s well worth a side trip to the island to take in this unusual celebration.