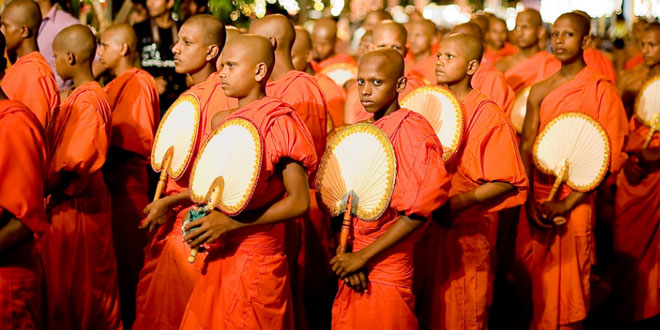 The main spiritual goal of Buddhism is to attain ‘Nirvana’, which means the spiritual liberation from the cycle of birth and rebirth. Buddhism religion does not believe in the existence of god and questions the Hindu practice of elaborate ceremonies, image worship, suppression of women and the elevation of Brahmins. Its core lies in the philosophy that every one is equal and that nothing lasts forever and nothing happens by chance. The teachings of Buddha teachings were first compiled on the Pali script as the ‘Tripitakas’. King Ashoka (250 B.C) was one of its chief believers and propagators. Buddhism is divided into 2 major sects – Huinayanas (travelers by a lesser vehicle) & Mahayanas (travelers by a greater vehicle).

Buddhism was bifurcated into two schools of thought by the 1st millennium b.c., when a new cult, known as Mahayana emerged as a reaction against the orthodoxy of the existing sect called the Theravadins or Hinayanas. The older version of Buddhism (the Hinayanas) believed that the only way to attain nirvana was by leading a monastic life of austerity, abandoning all worldly pleasures. There was no scope for a lay person to attain liberation. Prince Siddhartha, who later became the Buddha, was accepted as the sole possessor of the Eternal Truth. Cutting across China, Tibet, Japan and Korea, the Mahayana sect has a much larger following because of their more liberal interpretation of the teachings of the Buddha than the Hinayanas. The newer school allowed for the possibility of enlightenment to all those who followed the path of righteousness, irrespective of their status in society. Synonymous with the Mahayana sect are the values of love and compassion combined with that of knowledge. Equal importance is given to both these key concepts of Mahayana, and that might be one of the reasons this denomination attracts devotees in great numbers.

Mahayana (Mahayanas) introduced the idea of a deity into the religion, both on a speculative level which belongs more to philosophy, and in a popular way that was more like the polytheism of the masses.

For the purposes of popular religion, Buddha became the supreme deity, much as Krishna was for the average Hindu…

There are many Bodhisatvas (‘bodhi’ enlightenment) or noble persons in past ages who trod the path of the Buddha and became eligible to attain to Buddhahood. But they stopped at the bodhisatva stage and did not take the final step out of compassion for a suffering humanity.” They are compassionate celestial beings.

Gradually the historical Buddha faded away, leaving the Buddha as an expression of Dharma (the ultimate void) as the only reality. Without denying the historical Buddha, not only Mahayana, but all forms of Buddhism see in him only the manifestation of a type, and one of a series of Buddhas who appear on earth throughout the ages.”

With the help of numerous bodhisatvas and Buddhas, polytheism, belief in demons, and other alien ideas could be readily assimilated to Buddhism. The gods and demons of other peoples were declared to be incarnations or duplicates of the Buddhist pantheon.

Hinayana (Huinayanas) professes to follow the basic principles of the Pali canon and, by this standard, may be identified with primitive Buddhism. Certainly its emphasis on the four Noble Truths and the Eightfold Path places it nearer to the original teachings of Gautama than Mahayana whose express purpose was to reinterpret the Buddha’s esoteric doctrine in order to make it universally acceptable.

The issue between the two systems runs deeper than the familiar difference between the active and contemplative life in Western religious thought. It implies a radical dichotomy between two contradictory moral philosophies: Mahayana admits a personal deity (or deities) and therefore allows for the concept of social justice and charity under obedience to a higher power. Hinayana denies any god outside and above man and so logically concerns itself only with self, which it seeks to spare the trial of continuous rebirth by Nirvana annihilation.

Man seeks liberation, freedom, and salvation, “Nirvana”. Whether one believes in rebirth, or purgatory, or hell or in some form of suffering here or hereafter, to escape from suffering is a universal aspiration. Buddhism while avoiding speculation provides a practical discipline.