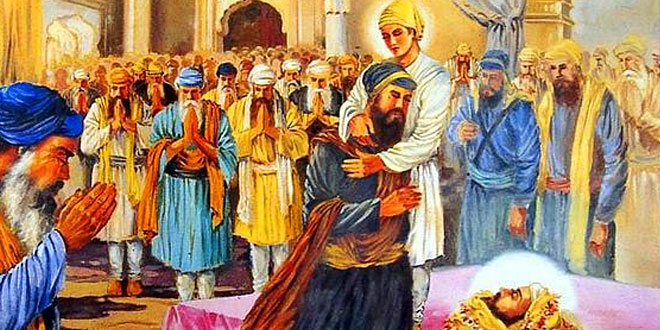 On November 11, 1675, Guru Tegh Bahadur was publicly beheaded in Chandni Chowk, New Delhi. After the execution his body was left in the open to serve as a reminder to all rebels. Only a low caste Lubana Sikh named Lakhi Shah had the courage to secretly take away the headless body in a cart to his hut, which was at the outskirts of the city. He erected a pyre within his hut so that it looked like an accident to an outsider. Another low Caste Sikh named Jaita took the Guru’s head stealthily and brought it to Guru Gobind Singh, who embraced and thanked the loyal man. The Guru, who was a little over nine years, then cremated the head of his father with due Sikh rites.

He was, however, deeply grieved to learn that the execution of Guru Tegh Bahadur had shattered the whole Sikh community and demoralized them. None had the courage to Claim the body and some even denied their religion when interrogate by the Muslim officials. Guru Gobind Singh was aware that their community was in the grip of fear, and this had not only weakened them but even broken their unity. He knew that revenge or active resistance at their moment was not right. He relished that the most important thing at that time was to bring the people together and unite their forces. For this, he decided to give them a dress code which would give them a common and distinct identity.

The young Guru had to face the gigantic task of infusing a new spirit of bravery and fearlessness into the people. And so, the first thing he did on becoming a Guru was to awaken his countrymen urging them a lead a decent life. Together with this, he began his drive of social reforms trying to eliminate religious hypocrisy and evil practices of the society. He managed to turn the people of Punjab into fearless soldiers. He was also aware that positive thinking was very essential for social progress and uplift of society. So he raised an army of poets and scholars too whose main purpose was to infuse the Hindu masses with a new life. The Guru himself was a good poet. He Also stressed on Sports to keep his men physically active and strong, as well as mentally alert. The people under his determined will and guidance gave him all their support and soon his army grew in size.

Anandpur became a massive army cantonment. The Guru started procuring and distributing all the sorts of arms and weapons. His army was soon growing in numbers. The Guru issued strict orders that no one was to attack anybody or usurp another’s rights except for the sake of honor or protection of the oppressed.

The Guru followed the daily tradition of his forefathers. He woke up early in the morning, about three hours before sunrise, and after having his bath he recited the Japji. After that he attended the mass congregation in the open and bestowed Namden to the vast multitude. The Guru Ka Langar was already open for everyone and anyone. The Guru himself supervised the distribution of food and greeted the people with warmth and affection.

New recruits joined his army every day. There was great enthusiasm among the people who came from far-off place to become his followers and join his army. With so many men Guru Gobind Singh got a new drum made known as Ranjit Nagara to summon his large army. A mere sound of it drew the brave Sikhs before him. At that time, only kings were entitled to own drums and the Ranjit Nagara was an open sign of authority or revolt against this practice. Some people went and complained to Mata Gujari about Guruji’s preparation for war and requested her to dissuade him from the dangerous path of revolt. Mata Gujari immediately advised Guru Gobind Singh to devote himself to religion and forsake the use of arms and weapons. He calmly and respectfully told her that he was only following the path of Guru Nanak and Guru Tegh Bahadur, and assured her that they would use arms only against tyranny and injustice. He also reminded her that God had sent him to help the oppressed and downtrodden. He also told that he was guided solely by religious spirit. On hearing this Mata Gujari blessed him and prayed that the Guru be given strength and courage to fight the tyrants. He addressed his brave soldiers of the Sant-Sena (army of Saints) and asked them to remain firm and true to their pledge of safety and protection of the dharma and the country. He also told them that the days of testing their chivalry and the faith was quite near now. But his soldiers were undaunted; they were infused with courage and were ready to face any enemy.