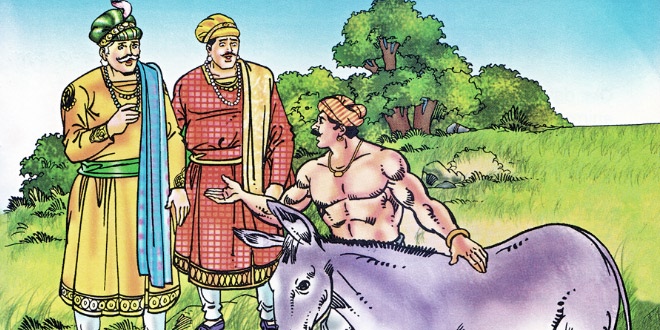 Donkey And The Emperor: One day, Emperor Akbar and Birbal went together for a walk. At the sunset Birbal sat down on the river-bank and performed ‘sandhya’ — the Hindu ritual. The Emperor was very much impressed. He said to Birbal, “Birbal, tell me how to perform ‘sandhya’. I like it very much and I too like to do it.”

Birbal replied, “Your Majesty, only Brahmins are supposed to perform ‘sandhya’ and not others.”

“Then, make me a Brahmin,” Emperor Akbar said.

Birbal replied, “No Maharaj, it is not possible!” But the Emperor insisted, “Why not? For me, everything is possible!”

Birbal was in a fix. He said, “Please give me some time for this.”

Donkey And The Emperor: Rib Tickling Tales Of Akbar-Birbal

The Emperor agreed. But after a few days, he again reminded Birbal of his promise. Then Birbal called a potter and said to him, “Tomorrow evening, you come to the riverside with your donkey and bathe him by scrubbing him vigorously. The Emperor and I will come there at that time. When we ask, ‘What are you doing?’ You would say, ‘I am changing this donkey into a horse!’ ”

Accordingly, the next day, the potter came to the river bank with his donkey. He started bathing and scrubbing the animal. The Emperor who happened to notice this strange sight asked the potter, “What are you doing?”

Birbal said, “Your Majesty, if one cannot change a donkey into a horse, how is it possible to convert a Muslim into a Brahmin?”

The Emperor was convinced and said, “Birbal, you are right!”