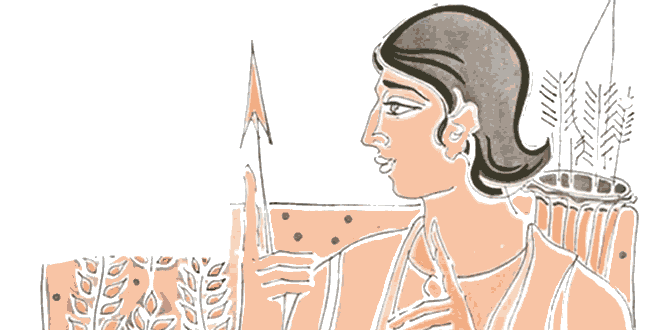 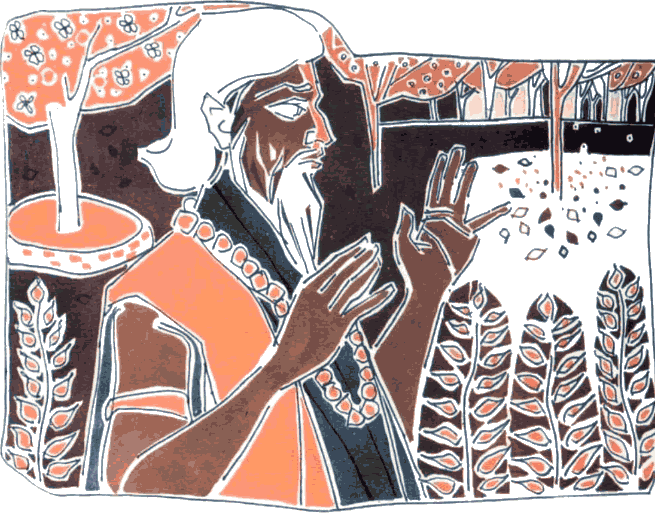 Then one day a great sage named Vedavyasa came to the forest camp of the Pandavas. He was received with great respect. During their talk with him the Pandavas expressed their fear about their future.

Vedavyasa said, “The Kauravas are now ruling the whole country. They have built up a strong army and they are very powerful. They will not easily give up what they had taken from you. If you want your kingdom back, you will have to fight the Kauravas for it.” 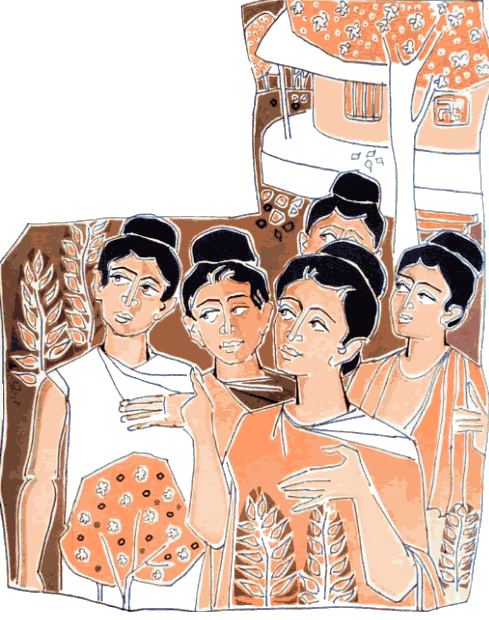 “How can we fight the Kauravas? Where can we raise an army to fight the powerful forces of the Kauravas?” said Dharmaputra, the eldest of the Pandavas.

“You may take some time to raise an army,” said Vedavyasa, “but you have friends and they will help you.”

“Kauravas also have their own friends,” said Dharmaputra, “and they will strengthen the Kauravas.”

“But you cannot just sit back,” said Vedavyasa. “You have to prepare for a war with the Kauravas. I advise you to seek the blessings of Lord Shiva first before you do anything. Let Arjuna go and propitiate the Lord and I am sure he will help you.”

The Pandavas accepted Vedavyasa’s advice and deputed Arjuna to get the blessings of Lord Shiva.

Arjuna did not know how to do that. He could not go and meet Lord Shiva for Shiva lived far, far above the earth and there was no means to go over there. The only way open to Arjuna was to please Lord Shiva by ardent prayers. So Arjuna went into the deep jungle below the great mountain Kailash. He selected a place under a huge tree and started his tapas-worship. It was a great task. He had to sacrifice all his comforts and concentrate his thoughts solely on the Lord. In doing so, he gave up food at first, and then water. He stood on one leg for days and days without moving, in meditation.

Birds and animals went near him without fear, thinking that he was something without life. Birds made nests in his hair. Creepers grew by his side and climbed over his body. Snakes crawled about him. Arjuna was not aware of any of these. He was so much immersed in his prayers.

God Indra came to know of Arjuna’s tapas. He wondered why Arjuna had undertaken such a hard task. Was he trying to become one of the Gods? Was he ambitious to overthrow Lord Indra himself and take his place? Or was he concerned only with defeating the Kauravas? Anyway, Indra was not happy at Arjuna’s tapas. He wanted to stop him from continuing it. He called the famous courtesans Urvasi, Rambha, Menaka and Tilottama and said, “You are all great beauties and you are capable of enticing any male, man or God. Arjuna is doing tapas in the jungles. I want you to go and draw him away from it. I hope you can.”

“Of course,” said Urvasi, “Who can withstand our charms? Arjuna will follow us here cringing for favors.”

“Good,” said Lord Indra, “then go immediately. Take with you a large number of attendants as well.”

The celestial courtesans did all they could but Arjuna could not be seduced. Then they lost their temper. They were angry. They asked their attendants to their best to divert Arjuna’s thoughts. The attendants, most of them ferocious and ugly, tried to frighten Arjuna, but Arjuna was not the man to be frightened. Defeated in their mission, Lord Indra’s courtesans and their attendants had to return.

In the meantime, the Kauravas came to know of Arjuna’s efforts to please Lord Shiva. They feared that Lord Shiva, when pleased, would provide Arjuna with some powerful weapons which would be used against them. So the Kauravas also wanted to prevent Arjuna from continuing his tapas. They sought the help of Mukasura, a terrific demon. Mukasura was only too willing to help the Kauravas.

Mukasura went to the jungle as a huge boar. He charged at Arjuna with the intention of killing him. Just then, from somewhere, a great hunter (Kirata) and his wife appeared and the hunter shot an arrow at the wild boar.

In the meantime Arjuna sensed danger from some wild animal, took his bow and arrow and shot an arrow with such strength that the wild boar was killed immediately. 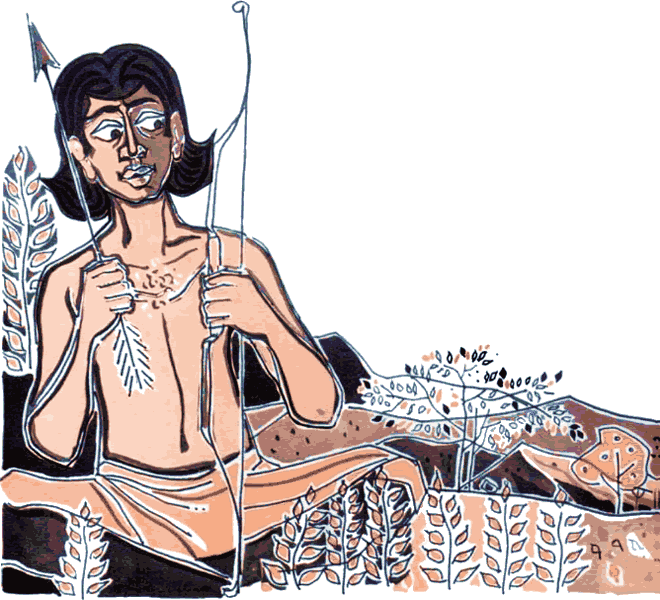 The hunter’s arrow just missed the animal, and fell at the feet of Arjuna. Arjuna saw it and thought that it was his own arrow which had returned to him after killing the wild boar. So he took possession of the arrow.

Suddenly the hunter and his wife appeared before Arjuna. The hunter demanded his arrow back. Arjuna said that it was his own.

“You are a thief. You have taken something that is not yours,” said the hunter.

“No, it is my own arrow that has come back to me after killing the wild boar,” said Arjuna.

“Will you give me back my arrow or not?” shouted the hunter.

“If you don’t give me back my arrow, I am going to take it from you by force,” said the hunter, taking out his bow and arrow and aiming at Arjuna.

“A mere hunter trying to challenge me!” exclaimed Arjuna.

“Yes, you are going to get it hot from a mere hunter,” retorted the hunter.

Arjuna got very angry and started shooting arrows like rain at the hunter. The hunter’s wife was frightened and by her miraculous power she turned all the arrows shot by Arjuna into flowers. Soon a mountain of flowers covered up the hunter.

Arjuna then challenged the hunter to come and fight. The hunter accepted the challenge and there was a great hand-to-hand fight between the hunter and Arjuna. Arjuna felt he was losing and the hunter started taunting him for his inability to win against a ‘mere hunter’. He caught Arjuna with his powerful hands and threw him with such force that he lay helpless on the ground. He wondered how he could be beaten. He prayed to Lord Shiva and again sought his blessings. He wanted to know from the Lord why he was defeated by a hunter. He made an idol of Lord Shiva out of mud and worshiped it with all devotion. He closed his eyes and said his prayers. Suddenly he felt that some new power had come to the idol. He opened his eyes and saw Lord Shiva and Parvati standing before him. 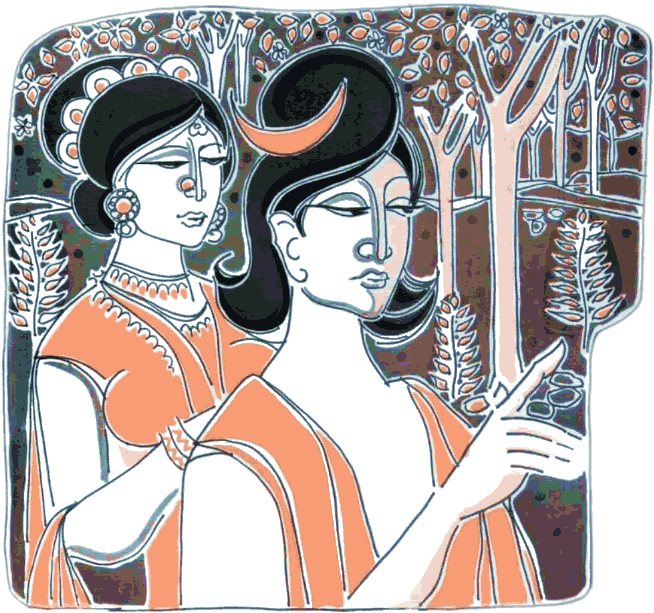 Lord Shiva raised Arjuna from the ground and said that he was very pleased to meet one of the greatest heroes of the world.

“My Lord,” said Arjuna, “I am not at all a hero. A mere hunter just defeated me in a fight.”

Lord Shiva smiled and said, “I wanted to try your strength. It was I who took the form of a hunter and challenged you. Now I am convinced of your great strength. You will always win in any fight. Here is something which will help you.”

Lord Shiva then handed over to Arjuna “Pasupatastra,” the greatest weapon ever seen anywhere, and blessed Arjuna and wished him all success.