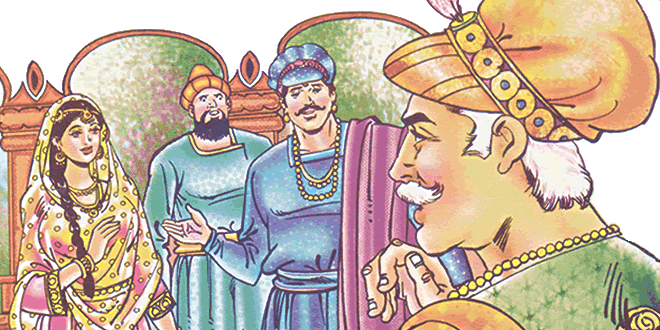 The next day, Birbal came to the court along with his wife and a prostitute. Then presenting his wife he said to the Emperor, “Maharaj, this is an angel. I get endless satisfaction and happiness from her.”

The Emperor looked at Birbal’s wife and said, “Birbal, but the angels are said to be very beautiful. She is dark and weak. In the Puranas*, angels have been described as stunning beauties.”

An angel and a witch: Short English Moral Story

Then Birbal said, “Maharaj! True beauty lies in the quality of an individual, not in the colour of the skin. She is an angel for me.”

Birbal, now brought the prostitute before the Emperor. The Emperor saw her and exclaimed, ‘Wow! She is such a beauty! Look at her beautiful clothes and expensive ornaments.” Upon which Birbal said, “All these are just to flatter the world. He who comes under her evil shadow, surely destroys his own life.” The Emperor understood Birbal and realized that character and quality of a person determine his or her beauty.

Puranas form the backbone of Indian culture and is the platform on which Sanatan Dharm which is popularly known as Hinduism was built upon. If you ask Indians the source behind their religious beliefs, customs and practices most of them will be linked back to the Puranas.

Puranas cover a wide range of topics including origin and creation of the universe, creation of gods, demi-gods, humans & demons. It includes guidelines for ritual practices to appease the gods and has many references to mythological stories related to the different gods under the pantheon of Hinduism.

Purana literally translates to old or ancient and it is difficult to identify during which time period were they created. Most literary researchers estimate the Puranas to be created about 2,000 to 3,000 years ago.

Previous A dog and a son-in-law: Witty tale of Akbar Birbal
Next Engineer’s Day Information For Students