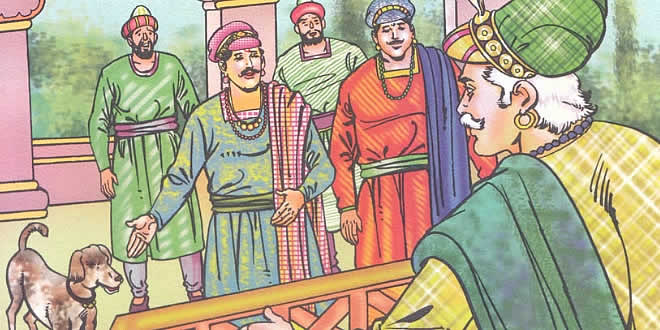 One day, Emperor Akbar said to Birbal, “Birbal! Bring me two such animals – one of which has a sense of gratitude and the other who forgets all this and takes to treachery.”

After thinking deeply over the matter, Birbal brought a dog and his own son-in-law to the court.

He presented them before the Emperor, and said, “Maharaj, I have brought these two as per your wish!”

The Emperor asked, “Birbal, now explain who is faithful and who is treacherous?”

A dog and a son-in-law: Story with Moral for Kids

Birbal replied, “Jahanpanah, this dog eats only leftovers and yet remains faithful to his master. Even if he is beaten or driven out of the house, he remains loyal to his master and comes to him at once when called back.”

“But, on the contrary, a son-in-law is a very ungrateful person. Even if you give him everything, he is never satisfied. The more you give him, the more he wants. He only thinks about his own interest. Even if his father-in-law has to take to begging on the streets!”

The Emperor was very pleased with Birbal’s answer and asked the guards to hang Birbal’s son-in-law to death. Then, he ordered them to give enough milk to the dog.

Birbal was taken aback to hear the Emperor’s orders. He said, “Jahanpanah! But I did not mean that only my own son-in-law is an ungrateful person. I referred to all the sons-in-law in the world. Therefore, it would be unfair to punish only my son-in-law. You too are someone’s son-in-law.”

The Emperor realized his mistake and withdrew his orders.

Jalaluddin Akbar was the third generation monarch of the Mughal dynasty, son of Humayun and Hamida Banu Begum (who was 14 years old when she got impregnated by Humayun). His parents met each other for the first time when Humayun was taking refuge in the fort of Amarkot, belonging to a Rajput Kingdom when he was exiled from his kingdom by Sher Shah Suri. On 15th October, 1541 Akbar was born to the couple while they were still in exile.