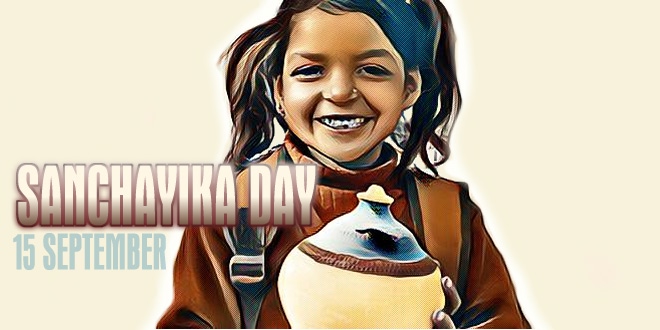 Sanchayika (school banking) Day is celebrated all over the India at 15th September in order to promote the money saving habits among students. It is organized by the Directorate of Small Savings, UT Chandigarh at the Girls Government College. The National Savings Institute and the Chandigarh Centre has also participated in the movement.

While celebrating the event it is appealed to the head of the various schools that to encourage the students and parents to promote their saving habits. According to the report it is noted that around 42 of the government schools has already participated in the event and some more are adding soon. Efforts are going on continuous to accept the scheme and celebrate it. Some of the students and schools are awarded for contributing to the Sanchayika Scheme.

Sanchayika Day was celebrated on Wednesday, 15th September 2021. The day is observed to instill the habit of saving and storing money for future uses.

Schools organized events in which the children were told about the benefits of saving money for future necessities.

Sanchayika is another term used for the bank which is run by the students for themselves. According to this scheme the aim of running the bank account for the students are encouraging the students for improving their saving habit in their early age as well as teach them the banking operations in more realistic way. They need to open a bank account or post office account.

In the early 1970, there is a provision made by the Indian Government for the students to have Banking facility in the school known as the Sanchayika under the National Savings.

The regional director of National Savings Institute Chandigarh Centre has explained the importance of the day celebration in order to promote the habit of money saving in the students and make easy managing the money. It is noted that around 29,000 students from the college and schools have accepted the scheme. For making the scheme successful, the government of India has made easy the banking facility in the schools called Sanchayika under the national savings.

Sanchayika Scheme is a money saving system for the students launched by the Government of India in schools. Currently the Sanchayika scheme is running in almost 17 UT schools to which around 9,826 students started saving cash money from pocket money. From 2010 to 2011, the cash amount saved by total students was 50.56 lakh. And the money saved by students all over the India was 2,66,000 crore from 2010 to 2011.

Procedure Of The Sanchayika Scheme: