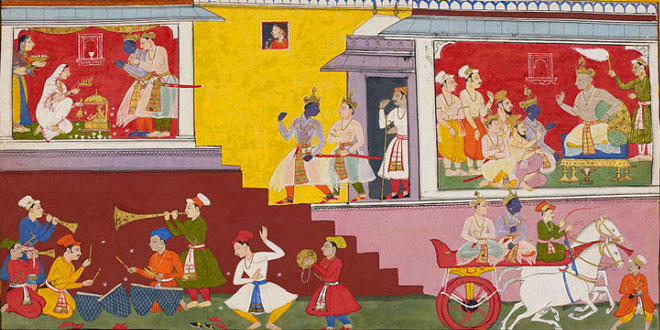 We Indians are the products of one of the oldest civilizations. We need to be really proud of our ancient history and cultural heritage. However, during the British Rule, we developed an inferiority complex, which adversely affected our quest to unearth facts relating to our glorious past. But our young and educated men and women, born and brought up in independent India, are capable of unearthing the true facts and are confident enough to evaluate these objectively.

Shri Ram being most basic to Indian “ethos”, it is necessary to know who is Shri Ram? Was he really born? If yes, when and where? As is believed by crores of people did he really put his feet on the Indian territory from North to South, reducing the sufferings of mankind and ensuring victory of good over evil? Let us take a look at historical facts:

The story of Shri Ram’s life was first narrated by Maharishi Valmiki in the Ramayana, which was written after Shri Ram was crowned as the king of Ayodhya. Maharishi Valmiki was a great astronomer as he has made sequential astronomical references on important dates related to the life of Shri Ram indicating the location of planets vis-a-vis zodiac constellations and the other stars (nakshatras). Needless to add that similar position of planets and nakshatras is not repeated in thousands of years. By entering the precise details of the planetary configuration of the important events in the life of Shri Ram as given in the Valmiki Ramayan in the software named “Planetarium” corresponding exact dates of these events according to the English calendar can be known.

Mr. Pushkar Bhatnagar of the Indian Revenue Service had acquired this software from the US. It is used to predict the solar / lunar eclipses and distance and location of other planets from earth. He entered the relevant details about the planetary positions narrated by Maharishi Valmiki and obtained very interesting and convincing results, which almost determine the important dates starting from the birth of Shri Ram to the date of his coming back to Ayodhya after 14 years of exile.

Maharishi Valmiki has recorded in Bal Kaand sarga 19 and shloka eight and nine (1/18/8,9) that Shri Ram was born on ninth tithi of Chaitra month when the position of different planets vis-a-vis zodiac constellations and nakshatras (visible stars) were: i) Sun in Aries; ii) Saturn in Libra; iii) Jupiter in Cancer; iv) Venus in Pisces; v) Mars in Capricorn; vi) Lunar month of Chaitra; vii) Ninth day after no moon; viii) Lagna as Cancer (cancer was rising in the east); ix) Moon on the Punarvasu (Gemini constellation & Pllux star); x) Day time (around noon).

This data was fed into the software. The results indicated that this was exactly the location of planets / stars in the noon of January 10, 5114 BC. Thus Shri Ram was born on January 10, 5114 BC (7121 years back). As per the Indian calendar it was the ninth day of Shukla Paksha in Chaitra month and the time was around 12 to 1 noontime. This is exactly the time and date when Ram Navmi is celebrated all over India.

Shri Ram was born in Ayodhya. This fact can be ascertained from several books written by Indian and foreign authors before and after the birth of Christ – Valmiki Ramayan, Tulsi Ramayan, Kalidasa’s Raghuvansam, Baudh and Jain literature, etc. These books have narrated in great detail the location, rich architecture and beauty of Ayodhya which had many palaces and temples built all over the kingdom. Ayodhya was located on the banks of the Saryu river with Ganga and Panchal Pradesh on one side and Mithila on the other side. Normally 7,000 years is a very long period during which earthquakes, storms, floods and foreign invasions change the course of rivers, destroy the towns / buildings and alter the territories. Therefore, the task of unearthing the facts is monumental. The present Ayodhya has shrunk in size and the rivers have changed their course about 40 km north / south.

Shri Ram went out of Ayodhya in his childhood (13th year as per Valmiki Ramayan) with Rishi Vishwamitra who lived in Tapovan (Sidhhashram). From there he went to Mithila, King Janaka’s kingdom. Here he married Sita after breaking Shiv Dhanusha. Researchers have gone along the route adopted by Shri Ram as narrated in the Valmiki Ramayan and found 23 places which have memorials that commemorate the events related to the life of Shri Ram. These include Shringi Ashram, Ramghat, Tadka Van, Sidhhashram, Gautamashram, Janakpur (now in Nepal), Sita Kund, etc. Memorials are built for great men and not for fictitious characters.

Date of exile of Shri Ram: It is mentioned in Valmiki Ramayan’s Ayodhya Kand (2/4/18) that Dashratha wanted to make Shri Ram the king because Sun, Mars and Rahu had surrounded his nakshatra and normally under such planetary configuration the king dies or becomes a victim of conspiracies. Dashratha’s zodiac sign was Pisces and his nakshatra was Rewati. This planetary configuration was prevailing on the January 5, 5089 BC, and it was on this day that Shri Ram left Ayodhya for 14 years of exile. Thus, he was 25 years old at that time (5114-5089). There are several shlokas in Valmiki Ramayan which indicate that Shri Ram was 25-years-old when he left Ayodhya for exile.

Valmiki Ramayan refers to the solar eclipse at the time of war with Khardushan in later half of 13th year of Shri Ram’s exile. It is also mentioned it was amavasya day and Mars was in the middle. When this data was entered, the software indicated that there was a solar eclipse on October 7, 5077 BC, (amavasya day) which could be seen from Panchvati. The planetary configuration was also the same – Mars was in the middle, on one side were Venus and Mercury and on the other side were Sun and Saturn. On the basis of planetary configurations described in various other chapters, the date on which Ravana was killed works out to be December 4, 5076 BC, and Shri Ram completed 14 years of exile on January 2, 5075 BC, and that day was also Navami of Shukla Paksha in Chaitra month. Thus Shri Ram had come back to Ayodhya at the age of 39 (5114-5075).

A colleague, Dr. Ram Avtar, researched on places visited by Shri Ram during his exile, and sequentially moved to the places stated as visited by Shri Ram in the Valmiki Ramayan, starting from Ayodhya he went right upto Rameshwaram. He found 195 places which still have the memorials connected to the events narrated in the Ramayana relating to the life of Shri Ram and Sita. These include Tamsa Tal (Mandah), Shringverpur (Singraur), Bhardwaj Ashram (situated near Allahabad), Atri Ashram, Markandaya Ashram (Markundi), Chitrakoot, Pamakuti (on banks of Godavari), Panchvati, Sita Sarovar, Ram Kund in Triambakeshwar near Nasik, Shabari Ashram, Kishkindha (village Annagorai), Dhanushkoti and Rameshwar temple.

In Valmiki Ramayan it is mentioned that Shri Ram’s army constructed a bridge over the sea between Rameshwaram and Lanka. After crossing this bridge, Shri Ram’s army had defeated Ravana. Recently, NASA put pictures on the Internet of a man-made bridge, the ruins of which are lying submerged in Palk Strait between Rameshwaram and Sri Lanka. Recently the Sri Lankan Government had expressed the desire to develop Sita Vatika as a tourist spot. Sri Lankans believe this was Ashok Vatika where Ravana had kept Sita as a prisoner (in 5076 BC).

Indian history has recorded that Shri Ram belonged to the Suryavansh and he was the 64th ruler of this dynasty. The names and other relevant particulars of previous 63 kings are listed in Ayodhya Ka Itihas written about 80 years ago by Rai Bahadur Sita Ram. Professor Subhash Kak of Lousiana University, in his book, The Astronomical Code of the Rig Veda, has also listed 63 ancestors of Shri Ram who ruled over Ayodhya. Sri Ram’s ancestors have been traced out as: Shri Ram, King Dashratha, King Aja, King Raghu, King Dilip and so on. From Kashmir to Kanyakumari and from Bengal to Gujarat, everywhere people believe in the reality of Shri Ram’s existence, particularly in the tribal areas of Himachal, Rajasthan, Madhya Pradesh and the North-East. Most of the festivals celebrated in these areas revolve around the events in the life of Shri Ram and Shri Krishna.

The events and places related to the life of Shri Ram and Sita are true cultural and social heritage of every Indian irrespective of caste and creed. Therefore, it is common heritage. After all, Shri Ram belonged to the period when Prophet Mohammed or Jesus Christ were not born and Muslim or Christian faiths were unknown to the world. The words Hindu (resident of Hindustan) and Indian (resident of India) were synonymous. India was also known as Bharat (land of knowledge) and Aryavarta (where Aryans live) and Hindustan (land of “Hindus” – derived from word Indus).

During Ram Rajya, the evils of caste system based on birth were non-existent. In fact, Maharishi Valmiki is stated to be of shudra class (scheduled caste), still Sita lived with him as his adopted daughter after she was banished from Ayodhya. Luv and Kush grew in his ashram as his disciples. We need to be proud of the fact that Valmiki was perhaps the first great astronomer and that his study of planetary configurations has stood the test of times. Even the latest computer software have corroborated his astronomical calculations, which proves that he did not commit any error.

Shabari is stated to be belonging to the Bheel tribe. Shri Ram’s army, which succeeded in defeating Ravana, was formed by various tribals from Central and South India. The facts, events and all other details relating to the life of Shri Ram are the common heritage of all the Indians including scheduled castes, scheduled tribes, Muslims, Christians, etc.

Prophet Mohammad was born 1,400 years ago. Jesus Christ was born 2,000 years back. Gautam Buddha was born 2,600 years back, whereas Ram was born 7,000 years back. Hence, discovering the details relating to Shri Ram’s life would be lot more difficult as destruction caused by floods, earthquakes and invasions etc., would be far greater. But, should that stop our quest for learning more about our cultural heritage?

As Indians, let us all take pride in the fact that the Indian civilization is the most ancient civilization today. It is certainly more than 10,000 years old. Therefore, let us reject the story of Aryan invasion in India in 1,500 BC as motivated implantation. In fact Max Mueller, who was the creator of this theory had himself rejected it. Let us admit that during the British Rule, we were educated in the schools based on Macaulay school of thinking which believed that everything Indian was inferior and that entire “Indian literature was not worth even one book rack in England”. If there were similarities in certain features of Indian people and people from Central Europe, then automatic inference drawn was that the Aryans coming from Europe invaded India and settled here. No one dared of thinking in any other way. Therefore, there is urgency for the historians and all other intellectuals to stop reducing Indian history to myth. There is need to gather, dig out, search, unearth and analyse all the evidences, which would throw more light on ancient Indian civilization and culture.

There is need for the print and the electronic media to take note of these facts and create atmosphere which would motivate our young and educated youth to carry out research and unearth true facts about the ancient Indian civilization and wisdom and would also encourage them to put across the results of their research before the people fearlessly and with a sense of pride!