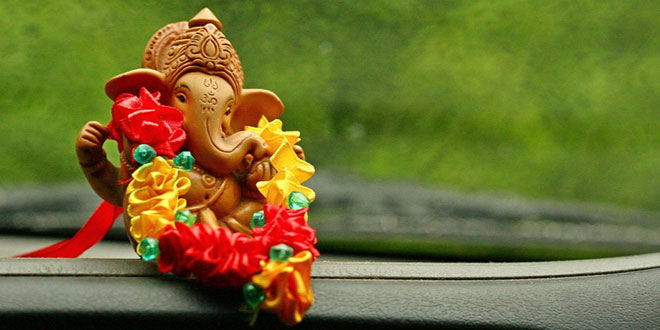 Ganesh Chaturthi is one of the popular festivals of Hindus, celebrated across India. It marks the birthday of Lord Ganesh, son of Lord Shiva and Goddess Parvati. It starts with Lord Ganesha idols being installed in the house and ends with the immersion of the worshiped idols, in the sea, river or lake. Just like other Indian festivals, Ganesh Chaturthi also has certain myths and beliefs associated to it. Lets us know more about them.

There are Ganesh Chaturthi myths which says that anyone who looks at the moon on the night of Ganesh Chaturthi will be falsely accused of something. If a person happens to see the moon unintentionally, listening to or reciting the story of the syamantaka jewel (found in the Puranas) can help ward off trouble. If the incident is intentional, then the person will have to face the consequences. The basis of this myth is in a very popular legend related to Lord Ganesha, who is known to be very fond of sweet, especially laddoos.

Lord Ganesha, on one of His birthdays, was going around house to house, accepting the offerings of sweets. He ate a good number of the sweets and set out at night, on his mouse. Suddenly, the mouse stumbled, as it saw a snake and became frightened. The result was that Ganeshji fell down. His stomach burst open and all the sweets came out. However, Ganeshji stuffed them back into his stomach and caught hold of the snake and tied it around his belly.

The moon saw Lord Ganesha doing all this and started laughing his heart out. This behavior of the moon annoyed the Lord immensely. So, he pulled out one of his tusks and hurled it against the moon. At the same time, Ganeshji cursed the moon that no one would look at it, on the day of Ganesh Chaturthi. If anyone does, he will surely earn a bad name. Since then, people refrain from looking at the moon, on the night of the festival.

Lord Ganesha is the favorite God of the masses. In India, a new venture is never started without worshiping the Lord. Ganeshji is worshiped first on all auspicious occasions, whether it is a marriage or a religious function. Ganeshji is the foremost god of the Hindu Pantheon. Any new project or venture that a Hindu family undertakes has to start with His name. In fact, most of the housewives utter His name before even starting a small chore, as He is believed to be the remover of all sankat (obstacles).

Lord Ganesha is believed to fulfill the wishes and dreams of all those who pray to him sincerely. He has long been associated with commerce and merchants pay homage to him every day. If an Indian business or bank fails, all the images of Ganeshji in the offices will be turned upside down, signifying bad luck. In households, it’s common for small offerings of money, flowers and food to be placed before the image of Ganeshji. These tokens please him and He brings more prosperity, wealth and peace to the family.