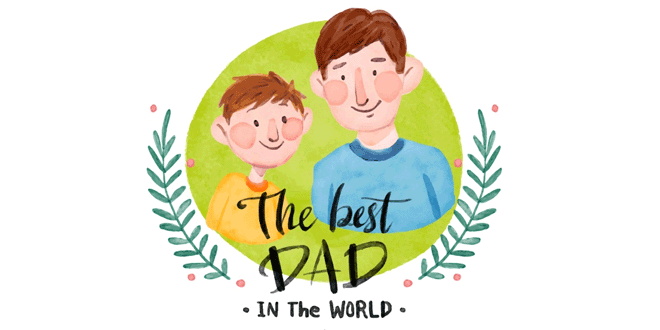 Fathers Day Around The World For Students

Official holiday is declared in many countries across the world for Fathers Day, where the occasion is celebrated with fun and fervor. People in the countries regard the day as important as any other festival and take special efforts to make it a memorable one. It is a day specially set apart for the men, who have attained the supreme position of fatherhood. The fathers are paid homage for their incomparable role in the family and showered with gifts, treats and best wishes.

In this article, we have given description about the celebration of Fathers Day around the world.

Fathers Day Around The World

The United States of America (USA) is one among the few countries in the world, where Father’s Day is declared as an official day to commemorate the unique bond between father and his children. On the third Sunday in June, people across the country pamper their father with treats and gifts. Although it is not quite clear, when people started celebrating the day in the country, some say that Father’s Day celebration started with a church service in West Virginia, in 1908. According to the records, Harry Meek, the President of the Chicago branch of the Lions’ Club, started the observance of Father’s Day in the USA.

Father’s Day is observed with pomp and gaiety in the United Kingdom, on the third Sunday in June. The day is celebrated the same way as in the US. On this day, people in the country pay tribute to their important male figures, including father, father-in-law and grandfather. People honor their father and express their affection by visiting them and bestowing gifts and treats upon them. If not possible, they would send gifts and cards to their father. Parties and get together are organized by several clubs and schools, to celebrate the joyous occasion. Games and fun-filled activities add to the color of the celebrations.

People in India are new to the concept of Father’s Day. Not a holiday though, Father’s Day is celebrated with equal pomp and gaiety in the country, as in the western countries. In fact, the idea of celebrating the occasion has been imported from the US and UK. In India, people living far away from their father take special effort in visiting them. Chocolates and greeting cards are some of the popular gift items chosen for the day. The celebrations of the day are concentrated on the metropolitan areas of the country. It is observed on the third Sunday of June, every year.

Father’s Day in Australia is celebrated the same was as in other parts of the world, the only difference being the date of celebration. In Australia, the first Sunday of September is observed as Father’s Day. The people in the country visit their father and bestow gift upon them. Although the occasion is a private affair, several clubs and societies in the country organize special programs on the day, inviting fathers and their children to take part. Games and activities are the attraction of the gathering, which is meant to pay homage to the loving bond between father and his children.

Celebrated on the second Sunday of November, the concept of Father’s Day was brought to Finland by the people in the US. This is the reason behind the similarity in the celebration of the day in the two countries, although the assigned dates for the day are far apart.  It is an official flag-raising day in Finland. Some of the popular gifts chosen for the occasion include chocolates and greeting cards. Like other countries, the Finnish people pay visit to their fathers on the glorious day, in order to show their respect to fatherhood.

December 5th is observed as Father’s Day in Thailand. This is the same day when King of Thailand, King Bhumibol Adulyadej, was born, whom the Thais consider as the ‘Father of the Nation’. Hence, the day holds historical significance too, in the country. Cultural programs are organized in various schools across the country, where small kids take pleasure in narrating stories, singing songs and rhymes for their father.

Previous What colour is an insects blood?
Next Fathers Day Sayings For Students And Children