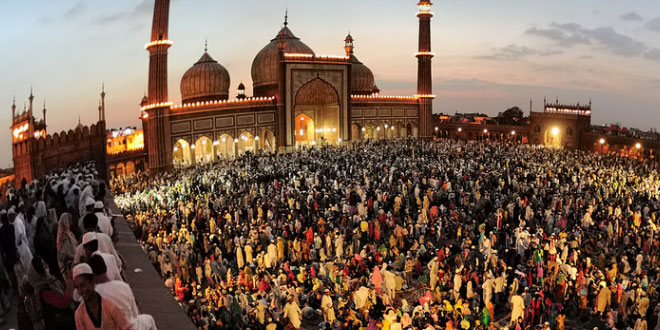 Eid-ul-Fitr Significance in Indian Muslims: Eid-ul-Fitr, also known as Ramadan Id, is celebrated by Muslims across the world, at the end of the month of Ramadan. It signifies the breaking of the fasting period, with the sighting of new crescent moon in the evening, on the last day of Ramadan. The celebration extends to a fiesta of three days and is also called ‘Choti Eid’ in India, starting on the first day of Shawwal (tenth month of the Islamic calendar). On this day, which is considered to be one of the greatest Muslim festivals, the observers of the fast all around the world greet each other in their local language and according to their respective traditions.

Eid-ul-Fitr Significance stems from the special meaning it holds for the entire Muslim community. Legend says that Prophet Mohammad had laid down Eid-ul-Fitr and Eid-ul-Adha as days of rejoicing and feasting for the Muslims, in the remembrance of Allah. Since then, Muslims fast for the complete month of Ramadan and offer spiritual devotions to the almighty Allah, believing that the fasting will bring them close to Allah and also get them forgiveness for their past sins. It is believed that whoever fasts during Ramadan with absolute faith shall have his past sins forgiven.

Another important aspect of Eid-ul-Fitr lies in the distribution of charity on the day. Every Muslim who has some means must pay Zakt-al-Fitr, a sum to be donated for the month of Ramadan, to impoverished Muslims. It can either be in the form of cash or basic foodstuff, including wheat, barley, dates, raisins etc. It is done to spare a thought to the plight of the poor and is different from the normal Zakat, which is given to purify one’s wealth. Holy Quran recommends giving donation to the poor on this auspicious day, the best time for which is before going to the mosque in the morning, to offer prayers.

Eid-ul-Fitr is also a festival that fosters brotherhood and interactions, as people visit each other on the days of festivity. Friends, relatives and loved ones are greeted and offered sweets. Gifts are given to children, mostly in the form of money. Sisters and daughters also receive gifts on this occasion. Some Muslims also pay a visit to the graveyard, a custom which is known as Ziyarat-al-qubur, to pay homage to the departed souls. Some scholars also believe that the month-long fasting is undertaken to acknowledge the superiority of the spiritual realm over the physical realm. Nevertheless, the spirit of conviviality surrounds the celebrations of Eid-ul-Fitr throughout the Islamic world.