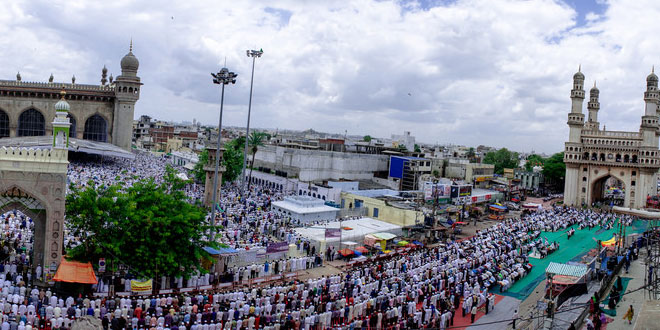 Among the five pillars of Islam, the fourth pillar is dedicated to preach fasting during the holy month of Ramadan. Also, known as Ramazan, the word finds it’s origin in Arabic language, which denotes the ninth month in the Islamic Calendar called Hijri.

It is believed to be the sacred month when Allah bestows his utmost blessings up on Muslims. The rituals of observing fast is the most important event in the month. Muslims abstain themselves from indulging in any kind of evil practice. Islamic religion defines evil in terms of anger, envy, greed, lust, malice, gossiping etc strictly. Sexual intercourse is prohibited during the fasting period. Purity is maintained at physical as well as mental level. The ritual of fasting is named as Sawm, which is again an Arabic term.

There is a stark difference between how Sunni Muslims perform Ramadan rituals and how Shia Muslims do. Sunni Muslims attempt to recite the whole Quran at one go via special eid ul fitr prayer ceremony, which they have named as ‘Tarawih’. This goes on during the entire month of Ramadan. Whereas, Shia Muslims call the same practice as ‘Bidah’ and beware all not to perform it. Rather, they perform ‘Qiyam-al-layl’ or ‘Tahajjud’ at every night of the month.

The holy month of Ramadan is divided into three parts: Rahmat, Maghfirat and Nijat. While Rahmat means “mercy of God, Maghfirat means “forgiveness of God” and Nijat means “salvation”. As their meaning suggest, Muslims (followers of the holy Quran), ask for Allah’s blessings to make their life meaningful. There in lies the significance of Ramadan.

Ramadan is the period of purgation after which heaven is met. Ramadan ends with Eid-Ul-Fitr, which is one of the most celebrated festivals of Muslims across the world. Celebrate Ramadan in a healthy way while you ask for happiness for yourself and your loved ones.

This question comes to our mind many times when we come across the word Ramadan. The answer to this question is, Ramadan is the ninth month of Islamic calendar. It is a belief that in the month of Ramadan the Holy book of Muslims, Quran was sent down from heaven as guidance for men and also as a direction and a means to Salvation. Ramadan is the month of fast. The entire month Muslims fast with no water and food during the daytime. Muslims have food only before the sunrises and after the sunsets. The day starts with eating of the Suhoor. Suhoor is the meal eaten by the Muslims who fast before the sun rises. Once Suhoor is done then Muslims who fast cannot eat or drink the whole day. In the evening when the sun sets then they have another meal called If tar. To open the fast they pray and have Iftar meal. Once Iftar is over Muslims visit their relative’s house and early in the morning sets back to the fast.

During Ramadan it is made sure that all the Muslims are devoted to worship God rather than any other work. Muslims visit mosque during Ramadan. Apart from the daily five prayers during Ramadan Muslims recite Taraweeh prayer also called the Night prayer. Some of the Muslims are so devoted that they spend the entire night praying. According to Islam Ramadan fast is the way when a Muslim can devote himself to god truly without giving much concern to other activities of the day.

Ramadan, the month of fast basically involves devotion of Muslims towards God. Muslims visit mosque and prayer during the entire Ramadan month. During the night they visit their friends and relatives houses and get to fast the next morning.

The end of the month of Ramadan is celebrated for three days called the Eid-ul-Fitr. The first day after the Ramadan month is called Shawwal. Eid-ul-Fitr is to spread happiness and love all around. Muslims visit their friends and relatives houses to wish Eid-ul-Fitr by saying Eid Mubarak. Eid is the festival when all the Muslims wear new clothes exchange sweets and gifts among themselves and have delicious food. This is the time to celebrate after a months fasting for all the Muslims.