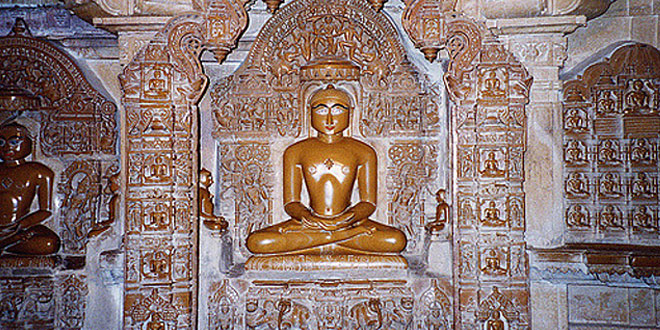 Brief Introduction to Jainism: The word “Jain” is derived from Jina (“Victor,” or “Conqueror”) implying final victory over bondage to life’s misery. Jainism has the universal message of nonviolence. The absence of a creator god in Jainism can be understood as a reaction against the nature worship of early Vedic religion, the priestly order of Brahmanism, and the theology of the Upanishads. Jain arts and architecture has enriched the artistic heritage of India.

Jainism was founded by Rishabha, and attained a major status in India at the time of Mahavira, who was born in about 599 B.C. in Northern India, in the town of Vyshali, in the present day Bihar, in a royal family. When he was about 30 years old, after he had been a householder, Mahavira decided to abandon his aristocratic surroundings in favor of an ascetic life. He cast aside his fine raiment, gave away his treasures, and embarked upon a severe regimen. For twelve years he underwent castigation, enduring bodily and spiritual injury, and emerged a teacher of many monks, a renowned preacher, and a profounder of a new religion.

Chief among the tenets of Jainism is the deification of Mahavira. The Agamas (“Precepts”) and Siddhantas (“Treatises”), declare him to be incarnate and preeminent, a venerable savior of men, the last of twenty-four tirthankaras (perfect souls). Jainism also preaches that karma is knowable and ineffable and that it is a cosmic power which directs retribution in the hereafter; this represents a marked break with the speculative Brahma of Hinduism.

In line with the founder’s austerity, the Jain is admonished to follow an ethical program of exacting discipline. The distinctive principle of Jainism is ahimsa, or nonviolence toward all living creatures, in both thought and action.

The two principal sects, Svetambara (white-clad) and Digambara (skyclad, or unclothed), diverged by about A.D. 82. The schism shook the main structure of Jainism. The split concerned the question of nudism. Living in the warmer zone of south India, the Digambara thought that to become a saint, a man should abstain from food and possessions, including clothing. They also denied that women are eligible for salvation. Living in a cooler region to the north, the Shvetambara sect wear white clothes and follow a less rigorous order.

Previous Jainism at A Glance: Jain beliefs and practices
Next What is Jainism? Main Points