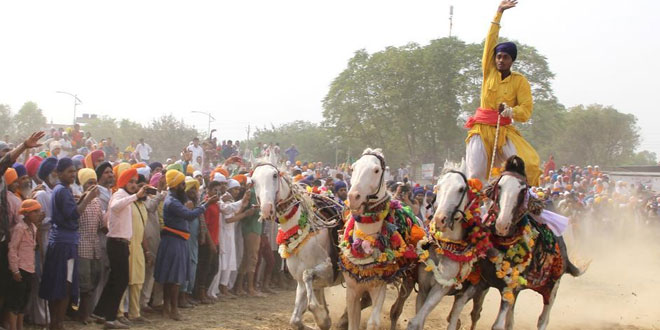 India is a land of festivals and celebrations, umpteen numbers of festivals are celebrated in the country throughout the year. One of the major festivals amongst them is Baisakhi. Celebrated every year on 13th April, this festival is of immense significance amongst Hindu and Sikh community in the country. Hindus regard this day as the sacred day when Goddess Ganga descended on earth to serve mankind. It also marks the beginning of their new year. Amongst Sikhs, it is considered as the day when their 10th Guru Gobind Singh ji laid the foundation of the sacred Khalsa Panth. The festival of Baisakhi is also an immense joyous occasion for farmers whose long awaited time of harvesting comes along with this festival.

Baisakhi is celebrated in different parts of India in a different manner; however one thing that remains the same is the zeal and enthusiasm of celebrations. The festival witnesses joyful celebrations throughout the country. The date of Baisakhi coincides with ‘Rongali Bihu’ in Assam, ‘Naba Barsha’ in Bengal, Puthandu in Tamil Nadu and ‘Pooram Vishu’ in Kerala, more or less regional forms of the festival celebrated in order to mark the beginning of new harvesting season and new year. However, the lively Baisakhi of Punjab has a different appeal. People in this state celebrate this festival with exuberance and devotion.

As the festival is of great importance in the Sikh religion, major activities of this festival begin from Gurdwaras. People wake up early and take bath in the holy river to mark the auspicious occasion and visit the near by Gurudwaras for the special prayer meeting organized for the day. After the Baisakhi ardas is over, people gather together to receive specially prepared Kara Prasad. This Prasad is then followed by a ‘langar’ or community lunch at the Gurudwara. After the Langar is over, people come out with the Baisakhi procession under the leadership of Panj piaras. The procession roams all over the city singing religious songs and performing Bhangra and Gidda.

For the large farming community of the country, Baisakhi marks a New Year’s time as it is the season to harvest the rabi crop. On this occasion, the farmers of the country thank god for the plentiful crop and successful completion of their farming season. They also pray for good season ahead. They buy new clothes and feast along with their relatives and neighbors. The feast is accompanied by dancing and singing with the Nagara and Dhol music. At some places, a fair as well as wrestling bouts are organized to make the festival completely fun filled and enjoyable.