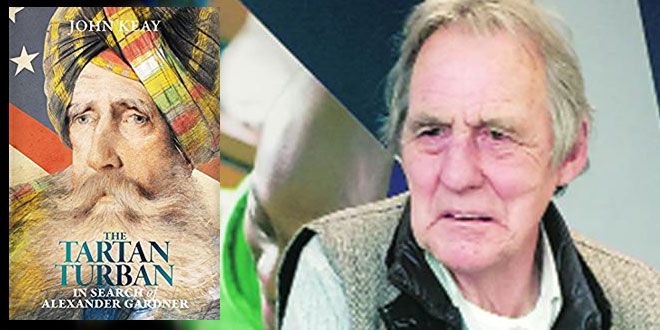 In one of his exploits, Flashman encounters a scary-looking Pathan in Khalsa-ruled Lahore and believes him an adversary. He, however, turns out to be an ally — and an American to boot. But while our anti-hero narrator is fictional, the American was not, with a long, colourful career of intrigue in Afghanistan, travels in Central Asia, and service to Ranjit Singh and his heirs.

“There were some damned odd fellows in the earlies…,” observed Flashman, but why is Alexander Haughton Campbell Gardner, alias “Gordana Khan”, probably the first American in the region, and his remarkable story not better known?

Possibly due to the confusion and controversy over Gardner’s early travels and his antecedents, says Asian and British India history expert and author John Keay, although his service to the Khalsa and subsequent quieter life in service of the Dogra maharajas of Jammu and Kashmir is fully attested.

And in this meticulously-researched and argued book, the first on this mysterious American in over a century, he seeks to explain why Gardner, “a hired gun transposed from the American West to the Asian East”, who fought in Dost Mohammad’s Afghanistan for “the good cause of right against wrong”, has not received his due, or rather, fallen out of favour.

It also seeks set the record straight on a man, who, Keay contends, may “reasonably be claimed as the most extraordinary of all the 19th century’s great adventurers”, having spent over a decade as white-gone-native in the wild heart of Asia and travelling to places unvisited by westerners for centuries, if at all. (Flashman’s creator George MacDonald Fraser also thought the same, placing Gardner in a list with the likes of “Sekundar” Burnes, Count Ignatiev, Yakub Beg, Arthur Connolly and James Stoddart, Paolo di Avitabile, and John Nicholson in that area and age).

Gardner’s reputation did not survive much after his death in 1877, says Keay, admitting that though he mentioned him in his two books on the Himalayas and their exploration in the 19th century, he did not find him fit to include in his “The Royal Geographical Society History of World Exploration” (1991) due to persisting doubts.

“Yet, nearly a century later and after making due allowance for the revisionist’s perversity, he seemed worth one last look,” says Keay, contending that as the story of Gardner’s Sikh service is beyond dispute, the account of his travels might be too, and “anyone with even a mildly romantic bent must surely take his side”.

And at the urging, and support, of Britain-based, over-decade-old independent publisher Kashi House, which specialises in works on Sikh heritage and history of Punjab, Keay has produced what could be the last word on the subject, though he holds it is neither a “rounded biography” or a “comprehensive vindication”.

Beginning with the story of Gardner’s daughter and her attempts to both preserve his reputation and find his treasure — another mystery in the tangled issue of Kashmir — the work covers much new ground, with the breakthrough discovery of first-hand material — reports and papers written by Gardner himself — which shed greater, though not full light, on some contentious episodes involving him.

Offering a balanced account of Gardner’s life and work, Keay also judiciously addresses doubts on his nationality and antecedents while debunking the hatchet jobs with plausible reasons that may have inspired them.

This aspect is also one of the two important lessons of this account.

On history itself, it shows that it can be easily re-fashioned or re-interpreted to serve the interests of the powers-that-be while one of its biggest fallacies is to assess a past figure in light of contemporary mores. (In Gardner’s case, if he was cruel in a cruel age, why should he be condemned in a more peaceful future?)

More empirically, the account of the murderous succession battle that doomed Ranjit Singh’s hard-built kingdom within a decade of his death is eye-opening. While the British takeover of India may have been brutal and treacherous, most native Indian politics it supplanted were not very principled or peaceful themselves.

That should offer some thought to those who label the Raj an unmitigated, unnecessary evil.