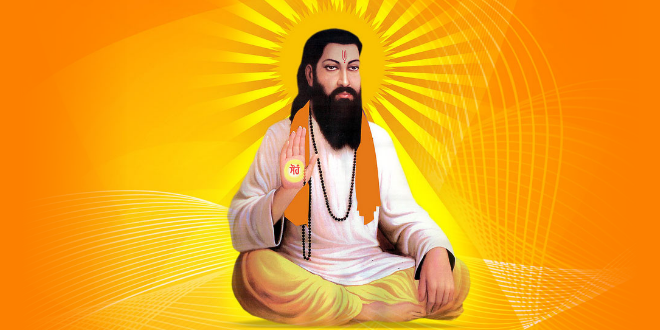 Sant Ravidas — The details of Guru Ravidas’ life are controversial. According to some he was born in 1376/7 or else 1399 CE but many scholars offer later dates. 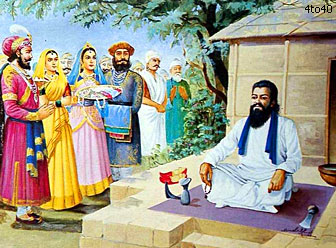 Schaller estimates his lifespan as 1450-1520 while the Encyclopædia Britannica contents itself with a floreat of 15th-16th century CE. Partly this is due to traditions that make him, one one hand, like his contemporary Kabir the disciple of Ramananda (he is mentioned as such c.1600 CE in Nabhadas’ Bhaktamal) but also, on the other, the guru of Meera (according to a song attributed to her: “guru miliyaa raidasjee”). However, as Schaller points out, the importance of such claims lies in their establishing the authority of a lineage of gurus (parampara). One may count oneself a disciple of a master without having actually met him.

His origin and parents are likewise given differently. According to one account he was born in a village named Sri Govardhan, near Varanasi in Uttar Pradesh, India: his father Baba Santokh Das was a leather merchant (chamar) and Mata Kalsa Devi was his mother. His father got him married to Mata Lona Devi at early age and according to the Ravidas Purana he had a son named Vijaydas. A region between Ahmednagar and Benares is named after him.

The queen of Chittorgarh is said to have been a disciple (this may be connected with Meera, who was married to the ruler of Chittorgarh). It is said that the conservative Brahmins of Kashi could not stand the popularity of this “untouchable saint”. A complaint was made to the king that he was working against age – old norms of social order (Varnashrama Dharma) – a cobbler was not supposed to talk of God or do work of advising or teaching. The ruler arranged for an assembly of learned men. Ravidas was also invited and was felicitated publicly. A procession was arranged (Shobha Yatra) and the king himself participated.

The revivalist movement in medieval India was pioneered by Ramanand and furthered by other equally great teachers all over India. The movement accomplished its supreme achievement when in the beginning of the 15th century; it gave birth to Ravidas. Being a cobbler by caste, he was out caste among the Hindus.

Sant Ravidas hailed from Varanasi and flourished during the earlier period of 15th century. He was a devout worshiper of Lord Rama. His father was displeased with him and turned him out of the house. After leaving the house he took up shoe-making, his family business, and made it a practice to supply shoes to all mendicant ascetics whom he came across. Ravi Das was always immersed in his devotion and this led to the closure of his business and this reduced him to poverty.

Ravidas was never interested in worldly pleasures. One day when he found five gold coins from among his usual articles of worship, he was worried. Then God ordered him, in a dream, to keep the coins with him. But he spent the gold coins in building a rest house for travelers and a temple for his God.

Ravidas was a monotheist and held that the soul differs from God in that it is encumbered with a body; God is everything, is gracious to all and is accessible to all. He alone can save men from evil passions and should be worshiped with all devotion that man is capable of.

Ravidas’ compositions have relevance even today. Taking its name from him, there is an important Vaishnava sect, the Rai-dasis. The sect has no particular sacred book, although it has orally preserved a number of hymns attributed to its founder. Several of these have been included in The Adi Granth, the holy book of the Sikhs. It is said, “his conversation and poetry were like the Sun that dispels darkness of doubt and infidelity”. The spiritual power of the saint had been known far and wide so much so that the queen of the Chittore touched his feet and got her initiation from him. Meera Bai also completed her spiritual discipleship under his guidance. Ravidas’ followers believe that he died at the age of 120 years.