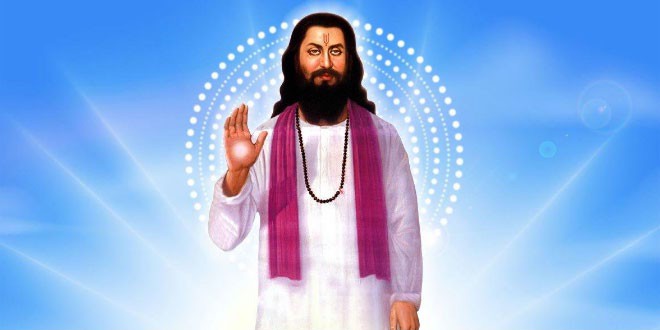 Guru Nanak Dev fulfilled Guru Ravidass’s request by accepting a collection of Guru Ravidass’ verses and poems. The earliest collection of these poems are available in the Sikh scriptures, Guru Granth Sahib (the Sikh holy book). It was complied by Guru Arjan Dev, the fifth guru of the Sikhs. It contains 41 verses by Guru Ravidass.

Bhagat Ravidas Ji, was a poet, devotee, and a Gurmukh, born on Maghshudhi 14 Pooranmashi in Smt.1456, i.e., 30 January, 1399 in Kashi. He was a monotheist and was a knower of Gurmat. He admired Kabir Ji and Namdev Ji. In the Sri Guru Granth Sahib Ji, many devotional hymns of Bhagat Ravidas Ji are present. He was a devotee of God, and his hymns are placed under Bani Bhagatan ki. Ravidasi’s treat Bhagat Ravidas Ji as their Guru and they have a seperate Sect from the mainstream Hindus, Muslims, and Sikhs. He was Tanner by profession.

Sikhs follow the teachings of Bhagat Ravidas Ji. His teachings have the same content as Bhagat Kabir Ji, Guru Nanak Dev Ji and the Bhatts. All of them are treated as Gurus and Sikhs bow before the Sri Guru Granth Sahib Ji which includes the teachings of many who had similar thoughts about God.

His parents were in the leather trade, and were very well off. He was barely five days old when Bhagat Ramanand visited his house and blessed the child. Ravidas was born to Raghu and Ghurbinia, who lived near the city of Varanasi.

When Ravidas reached the age of discretion his father inspired him to join the family business. But Ravidas was imbued with celestial and humane values. The money he received from his father for business, he spent in the welfare of the Saints and needy. His father was extremely perturbed and banished him from the house.

By this time Ravidas was already married. Rather than resenting his father’s actions he quietly left the house, started living in a make-shift hut with his wife, and set up a small wayside shop for mending shoes.