Habitat: Cultivated in Himalayas and the Khasia hills.

Uses: Leaves are Astringent, Tonic and Anthelmintic. They are useful in herpes, eczema, scrofula and syphilis. Fruits are sweet and emollient, thermogenic, and aphrodasiac. 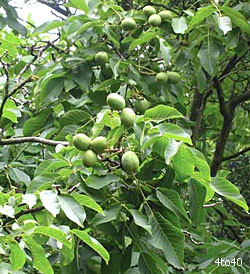 Juglans Regia (the Common walnut, Persian walnut, or English walnut), is the original walnut tree of the Old World. It is native in a region stretching from the Balkans eastward to the Himalayas and southwest China. The largest forests are in Kyrgyzstan, where trees occur in extensive, nearly pure walnut forests at 1,000–2,000 m altitude (Hemery 1998) notably at Arslanbob in Jalal-Abad Province.

Juglans regia is a large deciduous tree attaining heights of 25–35 m, and a trunk up to 2 m diameter, commonly with a short trunk and broad crown, though taller and narrower in dense forest competition. It is a light-demanding species, requiring full sun to grow well.

The bark is smooth, olive-brown when young and silvery-grey on older branches, with scattered broad fissures with a rougher texture. Like all walnuts, the pith of the twigs contains air spaces, the chambered pith brownish in colour. The leaves are alternately arranged, 25-40 cm long, odd-pinnate with 5–9 leaflets, paired alternately with one terminal leaflet. The largest leaflets the three at the apex, 10–18 cm long and 6–8 cm broad; the basal pair of leaflets much smaller, 5–8 cm long, the margins of the leaflets entire. The male flowers are in drooping catkins 5–10 cm long, the female flowers terminal, in clusters of two to five, ripening in the autumn into a fruit with a green, semi-fleshy husk and a brown corrugated nut. The whole fruit, including the husk, falls in autumn; the seed is large, with a relatively thin shell, and edible, with a rich flavour.

Juglans regia is native to the mountain ranges of Central Asia extending from Xinjiang province of western China, parts of Kazakhstan, Uzbekistan and southern Kirghizia and from mountains of Nepal, Tibet, northern India and Pakistan through Afghanistan, Turkmenistan and Iran to portions of Azerbaijan, Armenia, Georgia and eastern Turkey. In these countries, there is a great genetic variability in particular ancestral forms with lateral fruitfulness. During its migration to western Europe, English walnut lost this character by natural selection on account of competition with other vigourous forest species such as oaks. They became big trees with terminal fruitfulness. A small remnant population of these J. regia trees have survived the last glacial period in Southern Europe but the bulk of the wild J. regia germplasm in the Balkan peninsula and much of Turkey was most likely introduced from eastern Turkey by commerce and settlement several thousand years ago.

In Traditional Chinese Medicine, walnut seeds are primarily considered a kidney tonic. They are also considered beneficial to the brain, back, and skin, and to relieve constipation if it is caused by dehydration.