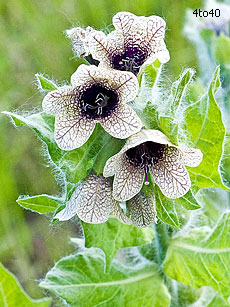 Henbane (Hyoscyamus niger), also known as stinking nightshade, is a plant of the family Solanaceae that originated in Eurasia, though it is now globally distributed.

Annual/ Biennial plant growing to a height of 1m. The plant prefers light (sandy), medium (loamy) and heavy (clay) soils and requires a well-drained soil. The plant prefers acid, neutral and basic (alkaline) soils. It cannot grow in the shade. It requires dry or moist soil. The plant can tolerate maritime exposure. The plant flowers from June to August, and the seeds ripen from August to September. The scented flowers are hermaphrodite (have both male and female organs) and are pollinated by Insects.

It was historically used in combination with other plants, such as mandrake, deadly nightshade, and datura as an anaesthetic potion, as well as for its psychoactive properties in “magic brews.” These psychoactive properties include visual hallucinations and a sensation of flight. Its usage was originally in continental Europe, Asia and the Arabic world, though it did spread to England sometime during the Middle Ages. The use of Henbane by the ancient Greeks was documented by Pliny. The plant, recorded as Herba Apollinaris, was used to yield oracles by the priestesses of Apollo.

Henbane can be toxic, even fatal, to animals in low doses. Its name dates at least to 1265. The origins of the word are unclear but “hen” probably originally meant death rather than referring to chickens. Hyoscyamine, scopolamine, and other tropane alkaloids have been found in the foliage and seeds of the plant. Common effects of henbane ingestion in humans include hallucinations, dilated pupils, restlessness, and flushed skin. Less common symptoms such as tachycardia, convulsions, vomiting, hypertension, hyperpyrexia and ataxia have all been noted.

Not all animals are susceptible; the larvae of some Lepidoptera species including Cabbage Moth eat henbane.

It was sometimes one of the ingredients in grut, traditionally used in beers as a flavouring, until replaced by hops in the 11th to 16th centuries (for example, the Bavarian Purity Law of 1516 outlawed ingredients other than barley, hops, and water).