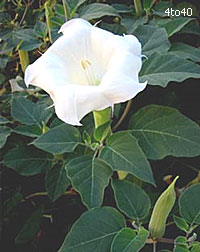 Uses: It is Narcotic, Anti Spasmodic, Anodyne, Ache Reliever. Helps in relieving the spasm of the Bronchitis in Asthma. It is used in treatment of Parkinsonism and Haemorrhoids. Young fruits are sedative and intoxicating. Leaves applied after roasting are useful in relieving pain.

Jimsonweed is a type of Datura. It is thought that Jimsonweed is a native of Asia and it was imported to Europe and then to temperate parts of North and South America. The name Jimsonweed is a corruption of Jamestown weed, after the town in Virginia to which it is first believed to have been imported to the USA from England. Jimsonweed is an annual, growing up to a height of 5 feet with large purplish or white trumpet-shaped flowers and spiny, egg-shaped fruits. The stem is purplish and glabrous (smooth) and the leaves are ovate, irregularly lobed, to 8 in long, and have a foul odor. The flowers, however, are fragrant and sweet-smelling. They open for only one evening, but new ones continue to open throughout the summer and autumn. The flowers are white or pale lavender, shaped like a five-sided funnel, 2-4 in long.