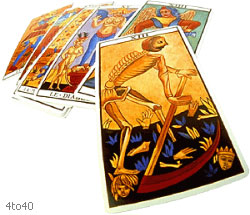 The Origin of Tarot Cards — which are actually cards with attractive pictures – continues to remain vague despite considerable research.

According to conservative estimates, tarot cards are at least 500 years old. However, some scholars place them in the first century after Christ. Still others aver that the cards originated from the religious rituals and symbols of the ancient Egyptians.

The earliest documented set of tarot cards is rooted in the second half of the 15th century and was painted in Italy. The Renaissance had already adopted the Greek gods and Greek philosophy, which is why it is Greek mythology and its moral, spiritual and mystical elements that form the backbone of tarot cards.

The images and imagery portrayed on the cards reveals hidden things that would not be discover-able through purely ‘rational’ means. The tarot cards have much to tell you.

The tarot pack is a set of cards that may be used either for divination, or as a philosophical machine for answering almost any kind of question put to it through a medium or someone familiar with its powerful symbolism.

The images on the tarot, and the interest in predicting events through symbols, dates back to ancient Egypt and even older civilizations, right across the world.

It is believed that the tarot may have traveled to Europe from the Middle East at the time of the Crusades, in the 12th century. The earliest surviving tarot deck, however, comes from 14th century Italy, where an Italian nobleman had a deck hand-painted as a present for his daughter’s marriage.

Tarot cards show the major themes of life, and what we can learn about ourselves. Each card is called Arcanum, which means ‘mystery’. The pack consists of 78 cards divided into two quite different, though not totally unrelated groups of cards.

Share
Previous Katrina Kaif Horoscope
Next How Tarot Cards Can Help You!