How To Make A Kite 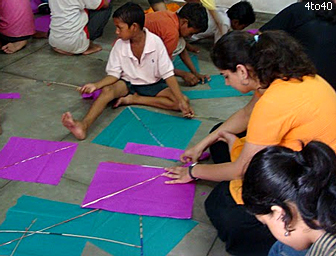 How To Make A Kite – The art of kite making has its origin in the uncertainties of the past. In fact, nobody has been able to trace the history of kites, but many will swear by the relaxing, fun-filled and skillful experience of kite making and flying. The main aspect of the idea, how to make a kite and fly one, is vivid and unlike in different places, around the world. But, what’s amazing to note, is the striking similarity in the thought process of different cultures, in making some artistic and creative design work fly in the sky. It represents the modest attempts and aspirations of every soul on the planet, however insignificant it maybe to create a space of its own in the seamless horizons. Flying a kite is thus, a highly enjoyable and engaging activity.

There are various ways to learn how to make a kite. Right from the small narrow lanes of the rustic yet colorful and vibrant towns of India to the chic places in Japan, every place has got its own special designs and skill set involved in making kites and flying them. Scientists like Benjamin Franklin used kites to demonstrate, that the lightning in the skies was nothing but electric energy at work.

They are still used for many scientific experiments and weather information applications around the world. So, the question arises, how to make a kite for each of these purposes. Obviously, due to a wide range of materials and styles of making, there are many different procedures for making a kite as we travel the globe. One such simple kite making procedure is described in detail as follows.

Decide on the type of design and the final shape of the kite, and trace it on a grid paper initially. According to the shape and space occupied by various markings on the grids, replicate the pattern on the cardboard, with the kite paper neatly placed on it. Use the scissor and knife to make careful cuttings. If possible, enlist the support of elders and friends. This will ensure quick, error-free work and make it a joyous activity.

Trace the entire pattern exactly as required. You can take the help of a cleaning bag for placing the cardboard and to get the exact shape cutout. After this process, you can give way to more of your creative ability by making designs and drawings as you like, on the kite paper. Allow the paintings to dry and then use the sticks in a strategically arranged pattern to support the entire paper once it takes flight. For instance, a simple trapezoidal paper kite flies very well, when supported by simply arranging two thin sticks, forming the diagonals of the trapezoid. The sticks can be a bit flexible to give a nice curve to increase the artistic effect.

The next important step would be to tie the string or bridle to the kite. The arrangement should again be centered around the kite, such that the sticks are held together and the knot directs and controls the kite. The string should be sufficiently large, at least 5 times the distance between two thoughtfully made holes, in the kite paper. Secure the knots sufficiently tight, so that it is easy to maneuver the kite and at the same time, not rip the paper on jerking the kite. The final stage is to tie a small loop to the tied framework, which finally can be connected to the flying line. The length of the line again depends on the flyer’s choice and the height to which a kite is to be raised.

The setup is finally ready and at the first hint of a windy sky with no chances of shower, you can venture out and enjoy the pleasures of kite flying.

Share
Previous How to Make an Enlarging Chart
Next Family Tree