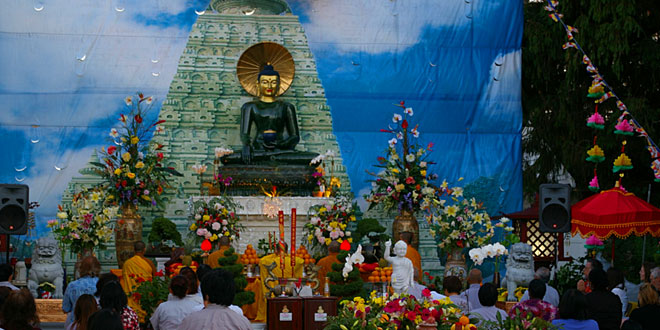 This is the most sacred day in the Buddhist calendar and is celebrated with great enthusiasm. Although Buddhists regard every full moon as sacred, the moon of the month of Vaisakh / Baisakh (April – May) has special significance because it was on this day that the Buddha was born, attained enlightenment and Nirvana. This three-fold coincidence, gives Buddha Purnima its unique significance.

Buddhist Legend Buddha’s wife Yashodhara, his first disciple Ananda, his charioteer Channa, and the horse Kantaka on which he renounced his kingdom to ‘find some answers to life’, were all born on Buddha Purnima.

Buddhist pilgrims from all over the world flock to Bodh Gaya to attend the Buddha Poornima celebrations. The day is marked with prayer meets, sermons on the life of Gautam Buddha, religious discourses, continuous recitation of Buddhist scriptures, group meditation, processions, worship of the statue of Buddha and symposia. The Mahabodhi Temple wears a festive look and is decorated with colourful flags and flowers. On this holy day, the Buddhists bathe and wear only white clothes. They gather in their viharas for worship and give alms to monks. Many spend their entire day at the vihara listening to discourses on the life and teachings of the Buddha or invite monks to their homes.

On Buddha Purnima, Buddhists eat kheer, rice cooked in milk and sugar, which they share with the poor. They set up stalls in public places to offer others clean drinking water and also show kindness to animals. 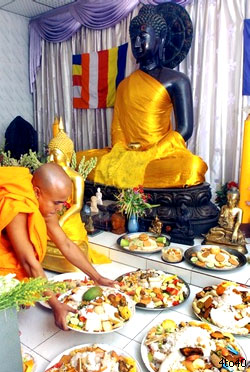 The Buddha trail related to his life – It is believed that Queen Mayadevi, the mother of Lord Buddha, gave him birth while emerging from a bath at the Pushkarni pool at the Lumbini garden and the place has been venerated thereafter.

Legend has it that the Buddha was born fully awakened on a night of full moon in Lumbini. He could speak and told his mother he had come to free all mankind from suffering. He could stand, and he walked a short distance in each of the four directions. The miraculous boy was named Siddhartha, which means ‘he who has attained his goals’.

In the town of Bodh Gaya, Siddhartha decided that he would sit under a certain fig tree as long as it would take for the answers to the problem of ‘sufferings in human life’. He sat there for many days, first in deep concentration to clear his mind of all distractions, then in mindfulness meditation, opening himself up to the truth. He began to recall all his previous lives. He could see everything that was going on in the entire universe. On the full moon of May, with the rising of the morning star, Siddhartha finally understood the answer to the question of suffering and became the Buddha, which means ‘he who is awake’.

The present Bodhi tree is probably the fifth succession of the original tree under which the Buddha had attained enlightenment. The Mahabodhi Temple stands east to the Bodhi Tree. Its architectural effect is superb. Its basement is 48 square feet and it rises in the form of a slender pyramid, till it reaches its neck, which is cylindrical in shape. The total height of the temple is 170 feet and on the top of the temple are Chatra which symbolize sovereignty of religion. Four towers on its four corners rise gracefully giving the holy structure a poise and balance. This sacred edifice is like a grand banner unfurled by time to proclaim to the world the pious efforts of Buddha to solve the knots of human miseries to ascend above worldly problems and to attain transcendental peace through wisdom, good conduct and disciplined life. Inside the temple is the main sanctum, on an altar, is a colossal image of Buddha in a sitting posture touching the earth by his right hand. It is the posture Buddha accomplished the supreme enlightenment. The statue is of black stone but it has been guided by the devotees. The entire courtyard of the temple is situated with a large number of varieties of stupas – votive, decorative, memorative. These stupas are of all sizes, built during the past 2500 years ago. Most of them are extremely elegant in structural beauty.

Five years after the Enlightenment in Bodh Gaya, Lord Buddha came to Vaishali, the capital of one of the first republican states in the world. He delivered his first sermon at Sarnath near Varanasi.

When the Buddha was 80 years old, he told his friend and cousin Ananda that he would be leaving them soon. And so it came to be that on the night of full moon, in Kushinagara, he ate some spoiled food and fell ill. He went into deep meditation under a grove of sala trees and died. His last words were…

“Impermanent are all created things; Strive on with awareness.”

Please note that Buddha trail can be worked on two counts, one on sites specific to his life and times and the other related to Buddhist culture elsewhere. The latter would include Ladakh where Buddha Purnima happens to be a visual spectacle, Sikkim monasteries, Buddhist caves of Udaygiri and Khandagiri in Orissa and Nagarjunakonda in Andhra Pradesh apart from the ones already mentioned above.