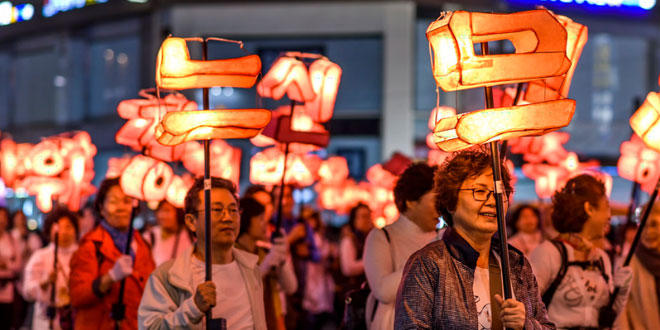 The full moon of the month of Vaisakh has a three-fold significance for Buddhists because this was the day when Buddhist God, Buddha was born, attained enlightenment and attained Nirvana.

On the day of Buddha Purnima, Buddhists arrange Panchasheel, Ashtasheel, Sutrapath, Sutrasraban, collective prayers and various other religious ceremonies. Many Buddhists organise three-day festivities. Many social and cultural events are also organised. Fairs for the children are also organised. The Bodhidroom Mela at village Baidyapara in Chittagong is one of the popular fairs. Some people visit the famous ruins of the Mahasthan, Paharpur and Mainamati, which are relics of the finest specimens of Buddhist civilization and culture.

Bhuddhist organisations distribute souvenirs, magazines and books to people. Radio and TV broadcast special programmes and newspapers bring out special issues or supplements. Various melas are organised in villages and viharas including tribal communities living in forests, tea gardens, plains, and the hill tracts have their own festivities centering round different deities.

Pilgrims come from all over the world to Bodh Gaya to attend the Buddha Poornima celebrations. The day is marked with prayer meets, sermons on the life of Gautam Buddha, religious discourses, continuous recitation of Buddhist scriptures, group meditation, processions, worship of the statue of Buddha and symposia.

The Mahabodhi Temple is decorated with wide range of beautiful flowers and flags. On Buddha Purnima Buddhist followers bathe and wear only white clothes. They collect at one place and pray together and give alms to monks. Some of the followers just spend the entire day listening to teachings and preaching of Lord Buddha. They even invite Buddhist monks at their viharas and listen to the discourses on the life of Lord Buddha. On Buddha Jayanti, Buddhists eat rice cooked in milk and sugar which is also known as Kheer. They even share this rice pudding with friends, relatives and poors. They set up stalls in public places to offer others clean drinking water and also show kindness to animals.

Here is a look at the various ways in which Buddha Purnima is celebrated and observed around the world:

In India (Gangtok), you will come across processions of monks carrying sacred scriptures walking down the streets as part of the general festivities.

In Burma, the Buddhists set a day apart every month in honor of the Buddha. Since the Buddha attained enlightenment sitting under a Bodhi tree, special care is taken in watering and tending Bodhi trees.

In Sri Lanka, houses are brightly illuminated and even the poorest people light at least one oil-lamp at the porch. Buddhists make Vaisakh Vakats out of bamboo, decorate them with stars and arrange them in their houses. Some people drape the walls of their homes with paper or cloth depicting incidents from the Jataka tales that are based on incarnations of the Buddha prior to his birth as Prince Gautama.

In Japan, replicas of shrines are made out of spring flowers and a small idol of the Buddha placed on them. They bathe and consecrate these idols with great reverence.

A lot has been written about the Buddha Purnima celebrations in various poems and novels and it has also been depicted in various paintings. Buddha Purnima holds a special significance in the lives of the Buddhists because it is the day when one reflects on his life and teachings of one of the greatest teachers, the world has known.