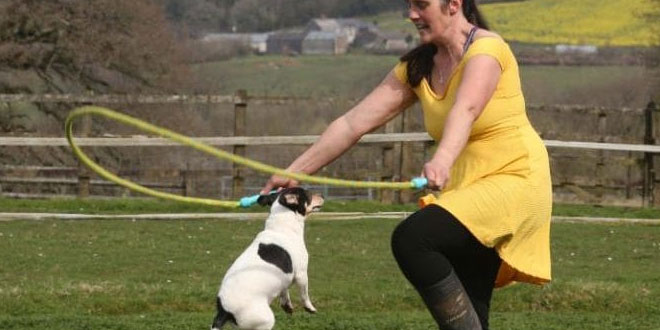 Most skips by a dog and person in one minute

London, UK – April 9, 2017 – Jessica the Jack Russell and her owner, Rachael Grylls, used a skipping rope to clock up 59 jumps in one minute, thus setting the new world record for the Most skips by a dog and person in one minute – single rope.

Photo: Rachel Grylls, 38, and eight-year-old Jessica broke the Guinness World Record for the most skips done by a human and a dog in one minute with 59 skips.

The Guinness World Records world record for the most dogs balancing a treat on their nose is 109, achieved by The Link Management Ltd (Hong Kong), in Stanley Plaza, Hong Kong, China, on 28 September 2014.

Rachael Grylls has been crowned Britain’s Most Talented Pet twice and is now showing off her athletic abilities, co-ordination skills and outstanding discipline by gaining a world record, The Okehampton Times reports.

‘We actually did 63 skips in total but one skip was taken off for each time we stopped,’ explained Rachael, who was shouting words of encouragement throughout the gruelling 60 seconds.

‘The original amount of skips to beat was 45 but recently a Japanese man and his dog raised the record to 50, so the pressure was really on. But we did it!’