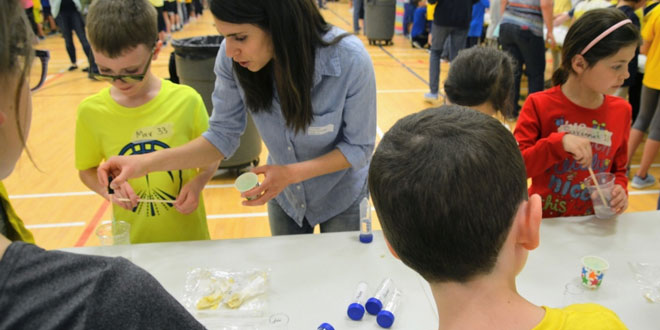 Sudbury, Ontario, Canada – May 26, 2017 – More than 340 students from R.L. Beattie Public School in Sudbury, Ont., gathered to conduct the experiment to isolate banana DNA and set the new world record for the Most people conducting a DNA isolation experiment simultaneously.

Photo: More than 340 students gathered to make World Record history, setting the world record for the most people conducting a DNA isolation experiment at the same time.

Guinness World Records also recognized the world record for the largest model of DNA; it measures 43.5 m (142 ft 8.4 in) long and was created by Ryerson University – Faculty of Science (Canada) in Toronto, Ontario, Canada, on 7 May 2016.

The experiment works by smashing a banana and mixing it with salt, water, detergent, and rubbing alcohol so the strings of the DNA become solid and visible, CBC News reports.

“We do this DNA thing every now and then … with smaller groups of kids, but I’ve never done it with more than 20 or 30 kids,” Merritt said. “We had 10 times that many kids, and it was fantastic.”