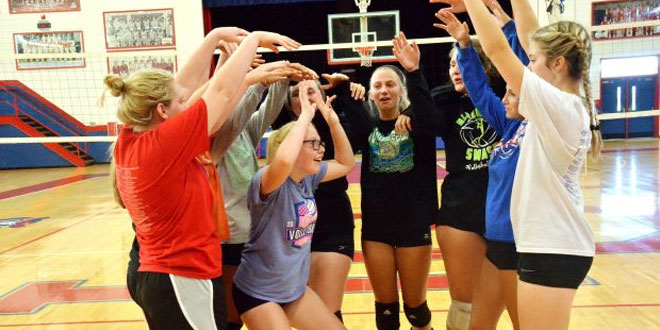 Photo: THE LADY PATRIOT volleyball team gathers for a brief celebration huddle after setting a new world record for most consecutive volleyball passes.

The Guinness World Records world record for the most consecutive volleyball passes is 127 and was achieved by D.S.V.V. “Punch” (Netherlands) in Delft, Netherlands, on 2 October 2015.

Guinness World Records also recognized the world record for the most people controlling volleyballs; it is 299 and was achieved by the people of Taiwan, at YungShin Sports Park, in Taichung County, Taiwan, on 2 October 2008. The participants controlled the ball for at least 10 seconds.

The new record of successful passes beats the previous record which was set by D.S.V.V. “Punch” in Delft, Netherlands, on Oct. 2, 2015.

“They crushed it,” LCHS assistant coach Kallie Bailey stated. “They passed the ball for 23 minutes straight. I had no idea they could pass it that long. I was hoping to get 500 passes.”